First look at the Android 4.0 smartphone with a 4.8in Super AMOLED HD display, 1.4GHz quad-core processor and unique voice/gesture-based features. 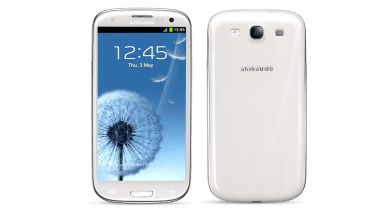 Samsung has finally taken the wraps off the highly anticipated Android 4.0 Galaxy S III device and it looks like the handset is going to be worth the wait.

Much of the pre-launch speculation was about the hardware specifications. Would the S III come with a 4.6in screen or 4.8in display? Being Samsung, the firm typically went with 4.8ins. The Super AMOLED HD display (1280 x 720) is massive and is the standout hardware feature of the handset. 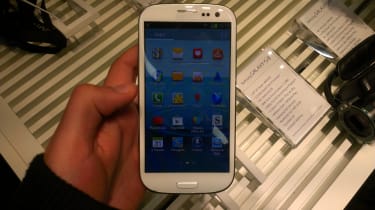 The display is likely to set a new standard for smartphones the clarity and colour reproduction make it feel like you're holding a mini-HDTV in the palm of your hand. 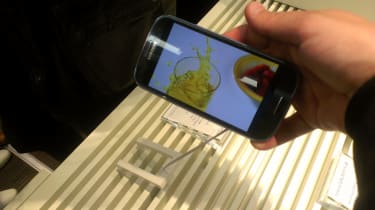 The Galaxy S III is curvier than its predecessor, the S II, and comes in white or blue. The device's build quality is excellent, and it actually feels lighter than its 133g weight. Samsung's special Hyperglaze finish gives the device a premium feel and it is just 8.6mm thick. 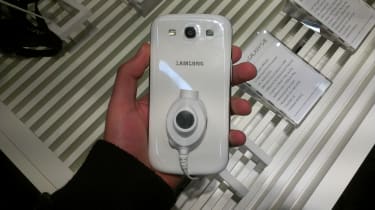 Other key specifications include the 1.4GHz quad-core Exynos processor (with the 32nm processor helping to enhance power efficiency), 1GB of RAM, an 8-megapixel camera. The handset will come with a choice of 16/32 or 64GB of internal storage and Samsung has also retained microSD card support (up to 64GB). In a bid to outdo HTC, Samsung will offer users 50GB of cloud storage from Dropbox, double the amount of its Taiwanese-based rival.

A mammoth 2100mAh battery will power the handset. But it remains to be seen whether this power pack provides all day battery life for data heavy users. Interestingly, the battery can be charged wirelessly, although this will be an added extra.

Despite packing some of the most impressive hardware seen in a smartphone to date Samsung is going to use the software as a key selling point. In particular the S-Voice system, which aims to out-do Apple's Siri feature.

A double tap of the home button brings up the voice recognition. It was able to answer questions such as, "What is the weather like in Paris?", despite the loud surroundings. We were also able to access other apps and play music. However, the system was not able to provide directions telling us this was currently unavailable. 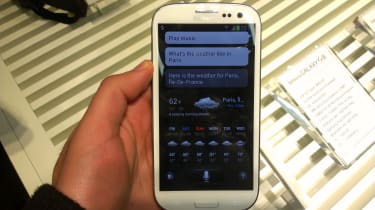 IT admins will be glad to hear that MDM features have been beefed up and Samsung has bolstered Active Exchange security to keep corporate emails secure.

The S III also packs other unique features. If you raise the phone to your ear, while sending a text message, the phone will automatically call that person. We were unable to test this as the device was tethered to the display stand, but a live demo on stage worked.

The front-facing camera also "watches" users. This may sound a little Big Brother, but it means the screen will only go into sleep mode when the user looks away from the screen or puts the phone down.

The only stumbling block could be the price, which hasn't been disclosed. But with the technology on offer, the Galaxy S III isn't going to be cheap. With a release date pegged for 29 May, we should have more information about SIM-free and contract prices soon.

Samsung is trying to differentiate itself from rivals by focusing on software. The voice recognition/gesture-based features as well as the 50GB of Dropbox storage could be key to attracting users. From a hardware perspective, the 4.8in Super AMOLED HD screen and 2100mAh battery could make this a must have for business users.