The Touchscreen edition of the popular e-reader is heavier and pricier than the original, and is only worth a purchase if audio or 3G is a priority. 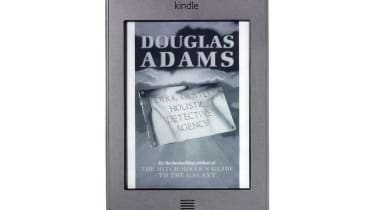 Text looks crisp and clear, no matter which of the eight font sizes it's set to, and page refreshes take place quickly. With a standard text-only Kindle ebook loaded, we measured the page-to-page time at 0.7 seconds the same as the non-touch model. 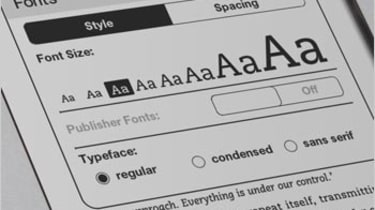 The onscreen keyboard is workable, too, and with practice it's possible to get a fair lick of speed up. You won't be writing a novel on it, but it's certainly more effective than a D-pad, and makes highlighting a breeze.

The touchscreen system isn't quite as intuitive as it might be, though. If you've used a Kindle app on a smartphone or tablet, you'll be used to what's become a standard control system across ebook reader apps: tap the left or right of the screen to page back and forth, and tap the centre to bring up options.

The Kindle Touch's controls frustratingly tear up the rule book, devoting most of the centre-right portion of the screen to the next-page control, with only a narrow area on the left for the previous page, and an area across the top for the options. Fortunately, swiping left and right to turn the pages works as you'd expect. 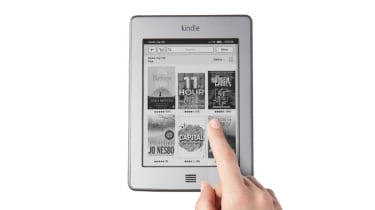 Amazon hasn't made the most of the touch technology for manipulating PDF documents either. Panning and zooming is easier than before, but it still isn't possible to dynamically reflow the text from PDFs as you zoom in.

Despite all this, there's nothing fundamentally broken here. We suspect anyone buying a Kindle Touch will get along fine, and none of the issues are deal-breakers. Moreover, the 3G Touch adds capabilities missing from the cheap Wi-Fi model namely, subscription-free 3G that works across most European countries, the US and broad swathes of Canada.

Then there's the small matter of audio support: the Touch reintroduces the headphone socket, speakers and text-to-speech feature cut from the previous device. At a stretch, we can see why someone might want the 3G Touch.

It’s more expensive than the Kindle Keyboard 3G, but performance is slicker, with much faster response times and page turns. Ask us to choose between the Wi-Fi Touch and the non-touch model, however, and we’d go for the £20-cheaper one every time.