Flexible displays with ultra efficient storage on course for 2014 rollout. 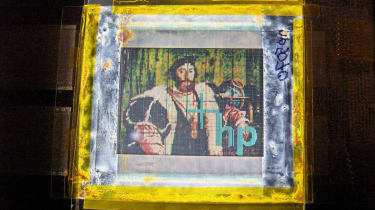 HP is also close to bringing its Memristor' technology to market. This is touted as the "fourth basic element" in integrated circuits and was discovered by HP back in 2008.

Short for memory resistor, the Memristor is able to store information even when power is disconnected. This makes it more energy efficient than current storage methods.

With a size of 100 atoms, the Memristor is also as small as a hair, and Apostolopoulos is confident it has the potential to replace Flash, DRAM and HDD.

The Memristor will pave the way for thin, lightweight and efficient devices

The aim is to combine the two technologies to make ultra-thin, light and efficient tablets or "workbooks", as Apostolopoulos referred to them. HP also plans to incorporate augmented reality by using the Aurasma engine, which it acquired when it purchased Autonomy.

HP is working with partners to commercialise the Memristor technology and it is expected to come to market in 2014/2015. The plastic displays are set to follow a around the same time.

If these prototypes can be executed correctly, they would give HP a boost over rivals, such as Apple and Samsung, who appear to be at the forefront of innovation