Nimble Storage has combined quick SSD storage, backup and disaster recovery into the CS240. Dave Mitchell puts the triple play IP SAN through its paces to find out whether it is worth over £65,000. 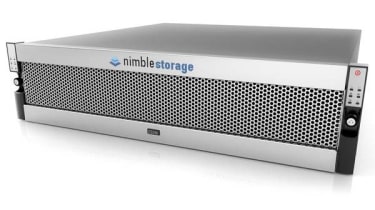 For performance testing we called up an Intel quad-node Xeon 3400 rack server running Windows Server 2008 R2. Each node had a dedicated connection over Gigabit to the appliance and was assigned its own logical volume.

Using the Iometer benchmarking app, we saw one node report a fast 113MB/sec read speed. Adding a second server returned a cumulative speed of 226MB/sec. This rose to 339MB/sec and 452MB/sec when we added the third and fourth servers, showing no contention for resources was occurring. 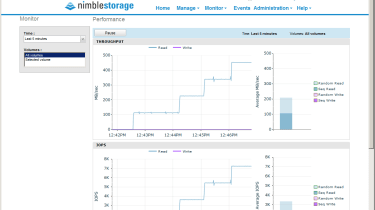 Volume usage can be closely monitored. Here you can see our four server nodes ramping the pressure up

We also tested MPIO (multi-path IO) operations on one node with it logged into the same target on two separate network ports. Iometer reported a perfect 226MB/sec raw read speed and when we pulled one network cable it simply continued at half this speed until we put it back in.

To test controller failover we had all four server nodes running Iometer and continuously pinged their respective data ports. We then unplugged the active controller from rear of the chassis and waited.

Failover isn't instantaneous as the Pings timed out for around 18 seconds and Iometer also came to a halt. However, once the backup controller was promoted to active duty, all tests sprung back to life and continued unabated. We also successfully tested failover whilst copying a 22.4GB folder to the appliance.

The CS240 scores well for ease of deployment as it's ready to go straight from the box. Nimble's SSD caching delivers top IP SAN performance, controller failover worked well during our tests and its massive snapshot capacity makes it well suited to providing near line backup facilities. However, Nimble hasn't done enough to justify the high price point.

The CS240 combines fast front line storage with integrated SSD acceleration at a price few vendors can match. Deployment was a cinch and although we weren't impressed by Nimble’s choice of hardware platform, it did deliver an impressive performance and flawless failover.