A P2P file sharing tool, which has an attractive £13 per year price point and comes with SSL encryption and password protection. However, the lack of online backup and need for high-speed internet lets it down. 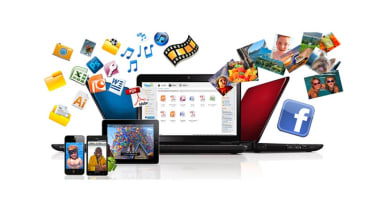 TappIn users can stream video and music from a host PC to any compatible target device such as a laptop, iPad, iPhone, Android or Windows Phone device via the inbuilt multimedia player. This will be useful for those who want to have access to multimedia content on the move. We had no problems with streaming content to a laptop and an iPhone over a 7Mbps connection.

Developers are also working on other features, which will be known as SocialShare. This will allow users to share content via text messages and through Facebook.

However, reading the blurb on the website, features such as 'Syncing photos with Facebook' appeared to be available and we were annoyed when we couldn't find them and were eventually told they were still in development. 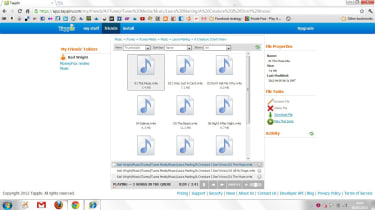 With its built-in media player, TappIn makes it easy to listen to music or watch videos stored on a remote PC

Although the P2P system saves you having to upload files to another server before being able to share them, we do have some reservations about this.

The lack of online backup is the primary concern. If your PC goes up in smoke or gets stolen you'll lose your files. And because people connect directly to your computer, rather than a server to which you have uploaded your files, their experience will depend totally on your broadband connection.

Companies such as Dropbox operate data-centres, with multiple high-speed inbound and outbound network connections. Upload your files to their servers, and once the upload is done, your colleagues can get to those files quickly and easily. With TappIn, if you're in a fleapit motel using dodgy Wi-Fi, any colleagues will have a similarly poor experience.

If you're going to be sharing files using a high-speed broadband connection, then TappIn is cheap and easy to use. You don't get the extra peace of mind afforded by an online backup, so you'll need a local backup system. But you should be backing up anyway.

In its current form, TappIn doesn't feel like it's ready for a commercial release. It would help if the features available were clarified to avoid frustration.

However, the 13 per year price makes TappIn a good investment and it is cheaper than full remote desktop offerings such as GoToMyPC, which costs 7.19 per month.

We envisage TappIn working well in conjunction with other cloud storage services such as Dropbox and Google Drive, which offer 2GB and 5GB of free storage, respectively.

The pricing and ample sharing options make TappIn an attractive investment for small businesses. However, the lack of backup and need for high-speed internet mean this is better suited to being used as a contingency rather than a primary method of accessing files remotely.