The ColorQube 8900 multifunction peripheral (MFP) is a solid-ink printer, with a snappy 44ppm colour printing speed, 7in colour touchscreen and 120,000 page monthly output. 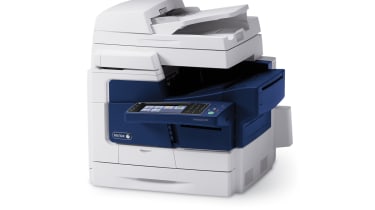 Xerox says the solid-ink system allows lower running costs and produces up to 90 per cent less waste than an equivalent laser printer. There are some clear advantages including the comparative ease of storing large stocks of consumables and the unique ability to 'top-up' a printer which has yet to run out of ink.

However, there are disadvantages to the system as well. The ink must be melted and kept molten to print. It takes takes 12-minutes for the printer to warm-up from a cold start. And if you ever need to move the ColorQube, you have to switch it off and wait 30 minutes for the ink to cool. While the 8900 uses significantly less power than a comparable laser when printing, it uses more on standby: the minimum we measured was 37 watts.

Unlike a laser printer, the solid ink system uses fixed heads to lay ink down on the page surface, producing strong results irrespective of media type and colour. Prints have a rich, glossy sheen. Graphics looked superb, but we were less impressed with the quality of black text, which had a shaky outline visible to the naked eye.

Under magnification it was clear the characters were composed of coloured dots, rather than pure black, which could be an issue in some exacting applications. We noticed a similar issue with mono photocopies, in which coloured dots are used for half toning providing excellent shade control but lending the page a grey-green tinge. Colour copies were superb, though.

Unable to scan from a PC, we tried to capture images directly to a memory stick, but the 8900 reported the USB scanning template was invalid. We could only scan to the MFP's public storage, from where images could later be retrieved via its web interface. The results, sent to PDF documents, were good enough for office applications.

This compares favourably to the cost of buying consumables for the 8700. Using Xerox's ISO/IEC 19752 yield ratings, cost for this work out at around 5.2p per colour page and a steep 1.4p ex VAT for a black page. The two pricing models, based on different standards, aren't directly comparable. However, they do suggest the lower running costs would offset the higher purchase price of the 8900 within a year for those printing two reams of mixed black and colour pages each week.

There's a lot to like about the ColorQube 8900 and the solid ink system at its heart. The printer is capable of excellent, rich graphics, has low running costs and is paired with what appears to be a quality scanner. We were frustrated by the driver issues we experienced prevented us getting the best from it. The modest review score reflects our experience, but with a working installer and scan interface it's likely that we would have awarded at least another star.