The 13in Ultrabook packs lots of native connectivity such as HDMI and Ethernet ports into the 1.6kg chassis. The T13 also has a solid keyboard and touts a nine hour battery life. 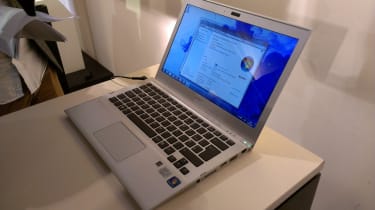 Sony is not offering much in the form of security, with no option for a Trusted Platform Module (TPM) or Self-Encrypted Drive (SED). This could push some business users to seek out alternatives such as the HP EliteBook Folio. However, they should be pleased with the inclusion of a 90-day trial of Intel's Anti-Theft Service, which helps to secure corporate data.

Input is shaping up to be good, even though Sony has used pancake-like shallow keys. We used the keyboard to type out a couple of test paragraphs and found letters to be well laid out. We didn't make any glaring mistakes either.

Another feature we liked was the flexibility. Tilting the screen backwards raises the keyboard ever so slightly. This small detail could make the T13 comfortable to type on for long periods. Sadly, the lack of backlit keys will be missed when using the device in low-light environments. 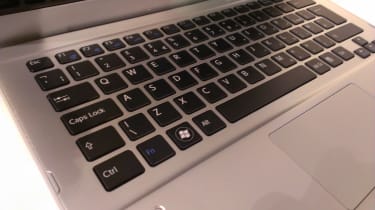 The keys looks shallow, but are well spaced and easy to hit

We found the trackpad to be reasonable. It has a simple design, with no physical buttons and supports multi-touch gestures. However, these gestures have been built into Windows by Microsoft and have proved to be rather inconsistent in devices such as the Asus Zenbook. This trend appears to be continuing with the T13.

Two-finger scrolling was a jerky affair and four finger swiping, which mimics switching between programs such as the 'Alt+Tab' stopped responding altogether. Seeing as many Windows 7 users don't rely on these features heavily, it isn't too much of a negative.

A big selling point will be the battery life. Sony is touting up to nine hours for laptops shipped with the hard drive and SSD combination. Users opting for the hard disk only model can expect up to seven hours of uptime.

There are no details of when T13 models featuring Intel's latest Ivy Bridge chipset will be available, but information is expected soon.

The T13 Vaio has all the ingredients to make it the best Ultrabook on the market. It comes with a beautifully crafted chassis, plenty of ports and a more than reasonable sub-£700 price point.