Storage vendor's chief executive admits its enterprise content management product is out of step, but insists it will not be axed. 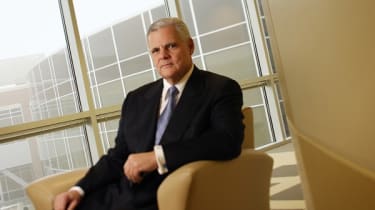 During his partner day keynote address at EMC World 2012, Tucci fielded questions from the audience about Facebook's IPO, his firm's acquisition strategy and its plans for Documentum.

I think you will see Documentum return to growth, and it will remain part of the company.

The latter is a key part of EMC's Information Intelligence Group's portfolio. In recent quarters, the division's revenues have remained flat, giving rise to speculation that EMC might sell off Documentum.

However, Tucci was quick to deny the firm would ditch the product, but admitted that it was in need of an overhaul.

"It was built as this big platform [that you would run applications on]. If you were an insurance company, you might [use it for] loans processing or other companies might use it to run expense control," said Tucci.

"But that's not the way consumers want to buy anymore. They want to buy more SaaS-orientated [services]."

That being said, the product has an important role to play in EMC's big data plans, stressed Tucci, which is why there are no plans to offload it.

"We're spending a lot of money [on Documentum]. Once you like a plan and have a team you think can execute it, you have to make sure you give[it] time," he said.

"I think you will see that return to growth, probably not next year, but it will remain a part of the company."

On the topic of Facebook's recent IPO, which saw the social networking site valued at $104 billion, Tucci pointed out that EMC was worth more than double that before the stock market crash at the turn of the century.

"When we hit the rough patch [the stock market crash], our market cap went from from $225 billion to $8.5 billion. That's a big drop," said Tucci.

When asked about the firm's acquisition strategy, Tucci declined to comment on who the firm might snap up next.

"The one thing I've learned is, if you take any area that we are really interested in, there are only ever two companies in that area that are worth a hill of beans. The rest are just noise," he said. "

"Obviously, if I said that's an area I'm interested in, the price of those two companies would go way up. So you have to do that in stealth mode."