A sneak peek at the 14in Ultrabook, which will feature a lightweight carbon chassis, Intel vPro support and HD+ display. 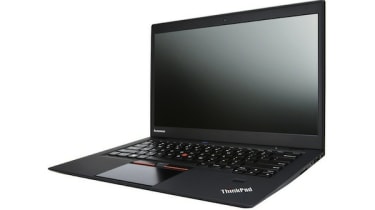 Other key features included 2 x USB 3.0 ports, with one boasting the capability of charging devices, such as smartphones, even when the device is off. There was a display-port and multi-card reader.

However, the Ethernet jack has been omitted to save weight. This could be frustrating for users who plan to use the Ultrabook as a desktop replacement as you'll need an adapter to use the internet in an office. 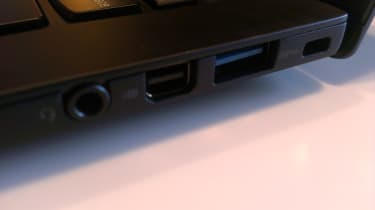 There are 2 x USB 3.0 ports, but an Ethernet jack is missing

Users will also be able to opt for a fingerprint scanner to boost security and integrated 3G, to get quick access to documents and email on the move without the need to tether.

There are two confirmed details about the battery. The power pack will be sealed in and will recharge to 80 per cent in just over 30 minutes. Battery life is yet to be disclosed as Lenovo is "finalising testing", according to Bhatia. It remains to be seen whether the device is able to last throughout the working day, a feature that most Ultrabooks have been unable to achieve.

Bhatia also provided IT Pro with a fascinating insight into why Lenovo chose a carbon chassis.

The carbon compound on the X1 is 200 per cent stronger than material used on previous models and was chosen over aluminium. We were shown test panels of carbon and aluminium, which the engineering team had tested by dropping pool balls on them. The results were clear to see as the aluminium sheet had noticeable dents in it from the impact, whereas the Carbon was unscathed. 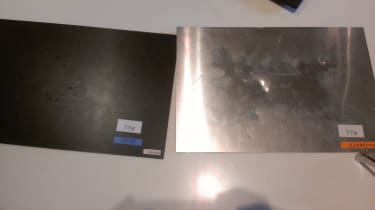 The carbon chassis is tougher than a metallic frame

Lenovo is using the seventh generation of its fan design, Bhatia explained. The design of the fan blades were inspired by the wings of an owl, after a group of Lenovo engineers saw the bird swoop up its prey silently. The engineers then proceeded to study why owls were able to move so quietly and applied the same principles for the fan.

Lenovo also uses dual-copper pipe exhausts compared to competing products which only use a single exhaust. This is why Lenovo machines run cooler and quieter, he added. 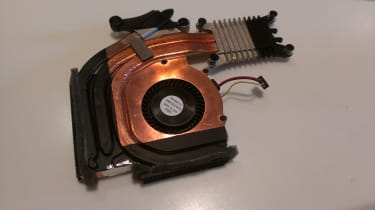 The dual-exhaust system is key to keeping Lenovo devices cool

There is no official release or pricing date for the X1, but details are expected in the coming weeks. IT Pro will have a full review soon.

Early indications suggest the X1 could be the best Windows 7 Ivy Bridge Ultrabook especially when it comes to portability and text input. However, concerns remains over the price and the battery life, which have yet to be disclosed.