IoSafe’s Solo is the toughest hard disk we’ve ever seen, but is a 1TB fireproof unit worth £150? 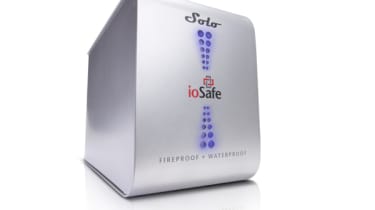 The ioSafe isn't built for speed. Its USB 2.0 connection is archaic next to USB 3.0, which offers ten times the theoretical speed, or the future-proofed Thunderbolt. Our benchmark results prove that USB 2.0 can't compete - especially when paired with an hard disk rather than any faster, pricier solid-state storage.

In our large file write test the Solo scored 44.2MB/s, and it read large files at 31.4MB/s. That's a tenth of the pace we'd expect from the best internal hard disks, and far behind the speed we've seen from better external drives. The iStorage diskAshur DT wrote large files at 140.9MB/s and read them at 320MB/s, and that's from a drive that's also designed for safety and security rather than speed. 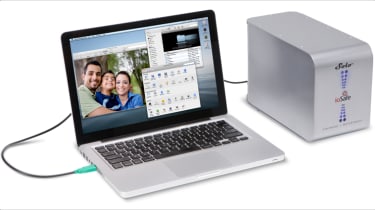 The Solo dwarfs most laptops

The Solo's performance didn't improve in our small file benchmarks. These tests are more demanding, but they recreate the types of operations often expected of external hard disks. The Solo wrote small files at just 19MB/s, and read them at 39.8MB/s. Again, it's a poor result: the iStorage drive returned figures of 38.6MB/s and 36.7MB/s in the same tests.

Our AS SSD tests backed up this poor performance, too: in the application's sequential file writing benchmark the Solo scored 26.2MB/s, with this figure slightly improving in the sequential read test with a 31.2MB/s result. The diskAshur DT was faster, with its AS SSD benchmark results of 128.3MB/s and 126MB/s in the same tests.

The Solo may offer extreme levels of security, but it's not quick or cheap. We tested the 1TB version, and this will set you back 150 - a hefty amount of cash for a comparatively small amount of storage. In comparison the average 1TB external hard disk costs at least half this.

The 2TB version is arguably better value as it costs 185. That's still plenty of cash and standard 2TB drives will cost half as much, but you're getting more bang for your buck with the larger drive.

However, you should remember the ioSafe Solo isn't built to be fast or cheap - it's designed to be the world's toughest external hard disk.

With a roster of features that ensure it'll be able to cope with fire, extreme heat, being submerged in water and more, we can't disagree. If safety and protection of data is your main priority, the Solo's high price is worth paying.

An expensive for a 1TB external hard disk, and slow thanks to its outdated and outpaced USB 2.0 connection, the Solo still proves tempting due to its extreme list of security features and ioSafe's extensive after sales coverage and protection. If you're in the market for an extremely secure external hard disk, few are better.