This 27in All-in-One packs an Intel Ivy Bridge Xeon processor, 8GB of RAM and unprecedented access to the components. But is it worth the £2500 price?

The Z1 is available with a broad choice of components. Our review sample was configured with the best HP had to offer and it was a tasty specification. Grunt was provided by an Xeon E3-1280 processor, one of Intel's latest Ivy Bridge chips. It's based on a 22nm manufacturing process, and its four Hyper-Threaded cores can address eight concurrent tasks. The Xeon chip runs at 3.6GHz, and two of its cores can use Turbo Boost to reach a temporary maximum of 4GHz.

The processor is partnered with 8GB of RAM, and storage is provided by a 1TB Hitachi Deskstar SATA/600 drive. The Z1 scored 1.02 in our application benchmarks. This is better than machines such as the VeryPC Broadleaf, which scored just 0.66 with its Core i3 processor.

The hard disk provided excellent benchmark results, thanks in part to its SATA/600 interface. It wrote large files at 252.1MB/s, speed which nips at the heels of mainstream SSDs. Its large file read score of 120MB/s and small file write result of 101.7MB/s are both impressive, too, although the Z1's small file read score of 23.8MB/s is more the kind of speed we'd expect from a hard disk. 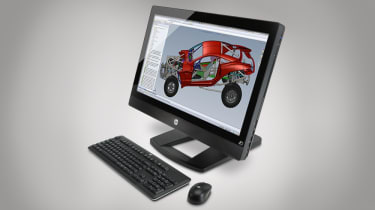 HP provides a choice between NVIDIA's graphics cards, but this will add considerably to the price

Graphical power was provided by NVIDIA's Quadro Q3000M graphics chip - one of the most powerful mobile parts produced by the chip maker. In the Z1, the card is supplanted onto a desktop-style card. It's clear this has the power required of high-end applications: a high-end Crysis benchmark score of 46fps is a good start, and this dropped to a still-impressive 39fps when we ran the test at the screen's native resolution of 2,560 x 1,440. That's on a par with Nvidia's consumer-level GeForce GTX 560, and should be enough power for graphically demanding business applications.

The mobile graphics chip means the Z1 can't compete with the most powerful workstations, but its 3,293 overall score in PCMark 7 is still up there, and a score of 1,738 in 3DMark 11's performance benchmark is able to compete with some of the most powerful mobile workstations. The Quadro handles 3DMark better than it did Crysis, too its score in this test is on par with the more powerful GTX 560 Ti 448.

Our final benchmarks regarding power and thermal performance, saw mixed results. The processor's peak temperature of 81 degrees was within the range expected, and the graphics card's top temperature of 45 degrees was low, but we noticed plenty of heat in certain places. The two areas of the screen nearest the processor heatsink and graphics cards got toasty, and plenty of heat was expelled through vents at the top of the chassis.