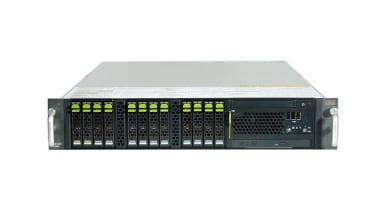 Fujitsu doesn't publish any hard facts about potential data reduction ratios so we used the Binary Testing deduplication test suite to ascertain these for file server backup operations. Using a 4GB data set of 1,000 files, the suite allowed us to introduce controlled changes within a desired percentage of the files.

At the host end we loaded up CA's ARCserve r16 backup software. To use the CS800 all we needed to do was map a share on the ARCserve server and declare it as a disk based backup device.

We used ARCserve to manage a standard backup strategy consisting of daily incrementals and weekly full backups. After the first full backup had run, we modified 2 percent of data in 40 percent of files prior to each subsequent backup.

After a four week simulation period we saw the appliance deliver a very impressive deduplication ratio of over 10.5:1. During the test, we had thrown over 44GB at the appliance but only 4.4GB of its capacity had actually been consumed. This is comparatively high as when we tested Falconstor's FDS SA101 we saw a lower data reduction ratio of 8.9:1 with exactly the same test. 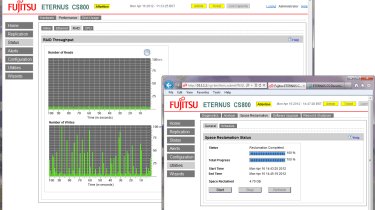 We've heard claims that deduplication can cause performance problems when restoring data from the block store but we didn't see any evidence of this. Using ARCserve to restore the entire test folder from the appliance back to the server returned average speeds of 38MB/sec.

An important feature to check out when considering value for a deduplication device is the raw capacity of its data repository. In this area, the Eternus CS800 S3 Entry scores over a lot of the competition as it offers a much larger repository for a similar price.