The first European smartphone with “Intel Inside”, the Orange San Diego runs on Android Gingerbread and features a 4in screen, 1.6GHz Medfield chip and 16GB of internal memory, for a SIM-free price of £199. 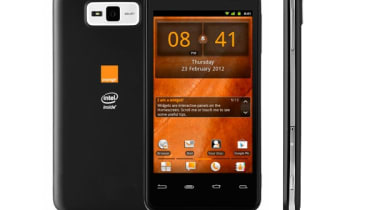 There were concerns about how long the battery in the San Diego would last when compared to ARM-based rivals, but Intel has worked hard to make sure the device is competitive.

Our test involved 12-hour usage, with one task completed each hour starting with a fully charged phone at 8am. The San Diego was set to push notifications, the screen was on full brightness and Wi-Fi was disabled. Under these conditions the San Diego lasted a respectable 11 hours and 10 minutes, just 10 minutes short of the HTC One S.

Of course battery life does depend on how you'll use your phone. As with many other smartphones, any lengthy screen-intensive work will drop the battery level fast. We noticed a swift drop once the 4.03in LCD screen was used to watch a 40 minute episode of a TV programme. However, the test does show that the 1460mAh battery will last a working day.

The San Diego is one generation behind other Android devices in terms of the OS. Although the device is capable of providing core business features such as access to corporate email, it ships with just a couple of enterprise apps.

The most useful is the stripped down version of QuickOffice Pro. The light version allows you to view PDFs, but does not allow document, presentation or spreadsheet creation so its inclusion is primarily to entice users to upgrade to the Pro version. There's also a navigation tool in the form of Navigon, which users need to activate through an Orange World account. 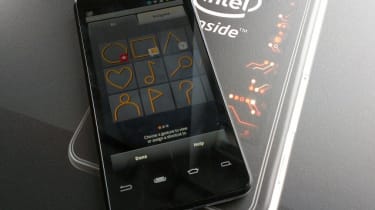 Gestures are useful shortcuts and take minimal time to setup

Orange gestures are another unique feature which allow users to open apps by drawing a quick symbol on screen. If you send texts to a particular colleague or relative regularly you can assign a gesture which will launch a message with that person's contact details embedded. To text your boss, you could draw a box on screen, for example.

All the standard Google apps such as Gmail, which are found on other Android devices are included. This means you will have to download additional business applications from Google Play, but there is good news on that front.