Microsoft has built-in a kickstand, offers a detachable Touch Cover and the choice of Intel Ivy Bridge and ARM-based processors. 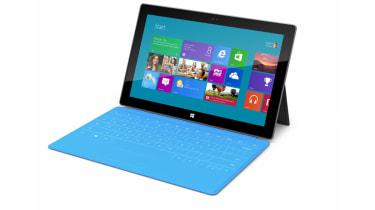 Microsoft could have out-foxed Apple with the inclusion of the Touch Cover. Not only does the cover help to protect the screen, it includes pressure-sensitive technology, allowing users to type on it. The Touch Cover connects to Surface via a built-in magnetic connector.

Microsoft will also offer a 5mm Type Cover, an add on that will provide a raised surface to mimic the keys on a a traditional keyboard. 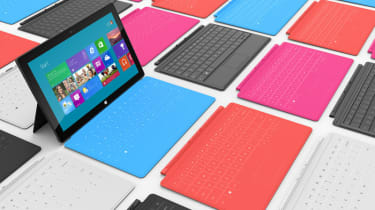 There will be a range of colours available so users will be able to customise their device and Microsoft will be able to generate an additional source of revenue through the sale of accessories.

No estimates have been given by Microsoft with regards to battery life. Microsoft has only gone on record as stating the Windows 8 Pro model will come with a 42 W-h battery and the RT edition will feature a 31.5 W-h pack.

It remains to be seen whether the Surface tablet can provide double digit battery life. Considering Windows 8 will support Flash, Metro apps and have a fully functional keyboard, it seems unlikely the Pro version will be able to. With ARM architecture, the Windows RT tablet should have the edge when it comes to longevity.

Windows RT Surface tablets will be released with the general availability of Windows 8. Microsoft has said the Windows 8 Pro model will be available approximately 90 days later.

No UK release or pricing details have been confirmed, but the ARM-device will be the cheaper of the two.

Microsoft has gone on record as saying that "suggested retail pricing will be announced closer to availability and is expected to be competitive with a comparable ARM tablet or Intel Ultrabook-class PC".

Microsoft has also noted that third-party Windows 8 tablets will have similar features and will also be priced in the same region as Surface devices.

Microsoft has made a bold move by debuting the Surface tablets, especially as it could disrupt relations with OEMs. The Surface tablets have unique features including the Kickstand, and Touch Cover, which could make them attractive alternatives to the iPad and MacBook Air.

Support for Windows legacy apps and Office 15 will no doubt be a major draw for enterprises. If the pricing is low enough, the Surface range could kick off mass adoption of Windows 8 within the enterprise.