CIOs: Give end users what they want

IT leaders need to help employees get the most out of cool new technologies if they want to safeguard their future. 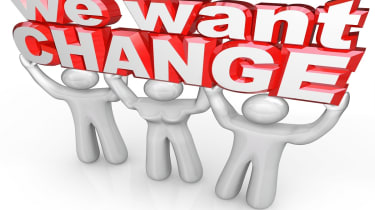 You have to feel for the CIO. The IT department, which has never been the most popular part of the business, is now in danger of becoming a direct enemy to the ever-powerful end-user.

Get those policies right and, rather than being an enemy, the CIO can establish a flexible route towards a brighter, digital future.

The customary role of the technology team is to provide IT resources to help people complete their jobs. Most of the time, employees across the business complain the kit they have is too old, too slow and too unreliable.

The traditional role of the tech team has changed recently, as broadband speeds have increased and innovative IT companies are starting to create flexible options relating to on-demand technology and mobile devices.

CIOs should be helping the business to use the digital innovation emerging from cool IT vendors. But the technology team is in danger of being sidelined as line-of-business executives buy IT on-demand.

The traditional CIO and vendor relationship is also under threat. Long-standing concerns, like licensing and vendor lock-in, are being replaced by concerns over a vendor's ability to keep pace with change.

Everything, in short, is moving quickly. Internal IT teams are struggling to keep pace with change, as are the technology suppliers that have traditionally helped CIOs develop an enterprise architecture.

So how can CIOs deliver value to the business in an era of fast-paced change? Most crucially, technology chiefs need to recognise that supply is an old school skill. Demand will be the crucial factor for the successful IT leader of the future.

The key to delivering value in this flexible world is end-user demand. Employees know what they want, and they want the CIO to make it happen.

IT leaders must establish the policies that allow users to make the most of the cool technologies they demand. Get those policies right and, rather than being an enemy, the CIO can establish a flexible route towards a brighter, digital future.