Inside the Enterprise: Business users may be attracted to Surface, but it is more likely to oust Android than kill the iPad. 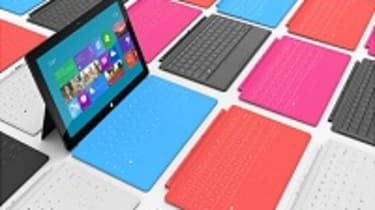 Bit by bit, Microsoft seems to be moving into hardware. Not satisfied with keyboards and mice, or games consoles, the software company has now announced its own tablet devices.

There is something quite attractive about the idea of a tablet that can run proper, full-fat Windows.

The new devices will be available in both Intel and ARM-powered versions, and Windows 8 RT and Windows 8 Pro models, although pricing and availability has not yet been confirmed.

Microsoft's entry into the tablet market might not be great news for either its partners or Windows Phone manufacturers, but it gives business users some very interesting new options.

For the device makers, or OEMs, Surface could pose a real challenge. If Microsoft throws its considerable marketing weight behind Surface, manufacturers such as Dell and HP will find themselves trying to compete on specifications and price, with their main competitor also owning the software technology for their tablets.

The move could also prove tricky for Windows Phone makers, who may well have been looking at Windows 8 (rather than Windows Phone 8) for that in-between device category, currently filled by Samsung's Galaxy Note.

Nokia executives, in particular, must be wondering what else Seattle has planned. And HP must now be questioning the decision to ditch Palm's webOS.

But for enterprises, there is something quite attractive about the idea of a tablet that can run proper, full-fat Windows. Aside from being able to run a native version of Office, businesses might find it easier to integrate Surface tablets with back-office applications designed with Windows clients in mind.

Windows tablets might also appeal to IT departments that develop their own in-house applications, especially if they can write one application that can work across Surface devices and full-spec laptops.

Until Microsoft releases sample machines, it is hard to say exactly how compatible these Windows 8-based machines will be. Don't, for example, bank on being able to run applications developed with Explorer 6 in mind, on a Surface device out of the box.

Despite this, though, Surface has a good chance of becoming the default choice for businesses that, for whatever reason, do not want to deploy Apple devices. And, if Surface encourages OEMs to release their own Windows 8 tablets, rather than throw in the towel, it could create a robust ecosystem.

The loser could well be the Android tablet. Android is already suffering from fragmentation, and a surfeit of low-cost, me-too devices. In the enterprise the prospect of a more stable tablet OS that fits with existing applications and IT support systems appeals.

But for all that, Surface is unlikely to "kill" the iPad. Windows tablets, and Surface, are likely to be issued to task workers who need to run those Windows applications. As some analysts have already pointed out, most executives who want a tablet, have already bought an Apple one.

As an IT professional, you probably don't want to be telling them they have to replace their iPads with a Windows device, however slick.