With 5.1 million pixels on the 15.4in display, the latest Intel Ivy Bridge processors and up to 768GB of SSD storage, Apple has raised the bar for laptops. 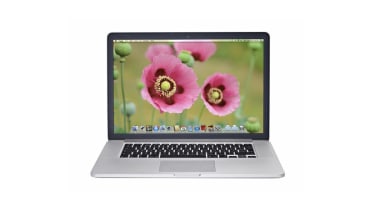 Applications that aren't yet Retina-optimised are usable, but stand out like a sore thumb, with pixellated text and icons contrasting uncomfortably with the crisp background of the OS X desktop. Google's Chrome is just one such application (unless you activate its developer mode and use the beta Retina version), and with identical web pages showing in both Chrome and Safari, the difference is painfully obvious.

For those craving more desktop space or larger onscreen text than the standard "Best for Retina" setting provides, it's possible to shrink or enlarge the virtual desktop. There are actually four different scaling settings, representing 1,024 x 640, 1,280 x 800, 1,680 x 1,050 and 1,920 x 1,200. Although elements of these scaled modes won't be theoretically as crisp as the "Best for Retina" mode it's hard to see a qualitative difference. Unlike on a Windows PC, where moving away from the screen's native resolution substantially degrades the onscreen image quality, OS X's scaling keeps text and icons crisp and clear.

The screen is undoubtedly the star hardware feature, but it isn't alone. Apple has redesigned the chassis to be slimmer and more refined than ever. Every ounce of fat has been trimmed from the old model, dropping the weight by half a kilo and the thickness by 6mm.

You can't lose this much weight, however, without a radical change of approach. Gone is the optical drive, the mechanical hard disk has been replaced by an SSD, and upgradability also takes a blow. With the RAM soldered into the mainboard, an SSD module of proprietary design and a set of non-user-replaceable batteries, not a single user-upgradeable element remains in the new Pro. 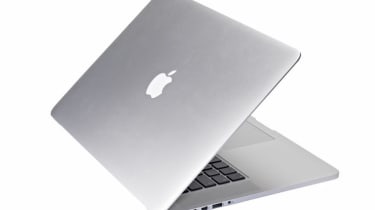 Apple has ditched the optical drive to help shave off 500g

Some of these compromises are easily mitigated. Considering the ease with which new applications and even OS updates can be obtained via the App Store, the lack of an optical drive is becoming less of an issue as time passes. Of course, it's always possible to shell out the 65 for the USB SuperDrive if it's a necessity. While the non-upgradeable RAM may set some power users twitching with indecision, it's likely aftermarket vendors will soon begin marketing replacement SSD modules.

Regardless, one look at the MacBook Pro's lithe 18mm-thick frame should banish these worries from mind: this is a truly stunning laptop. The weight loss doesn't mean a compromise in build quality. Viciously wrenching at the base elicits hardly any flex, and it isn't until you prod unkindly on the lid that any ripple of distortion passes through to the LCD display. 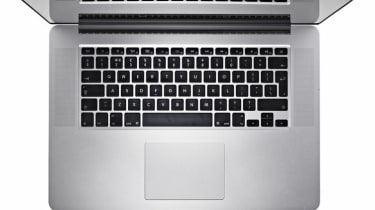 The keyboard and touchpad are as good as ever. As usual, we found ourselves taking a little time to get used to the narrow Enter key, but this is no major criticism. The keys have a lovely cushioned spring to each keystroke, and the touchpad is a joy. The wide, smooth glass surface gives a crisp, smooth feel under the finger, and in stark contrast to the patchy gesture control in Windows 7, the multitouch gestures gel beautifully in OS X.