Brother's desktop document scanner comes with the ability to scan directly to USB devices, but the image quality and speed can't quite match the offerings from competitors such as Canon. 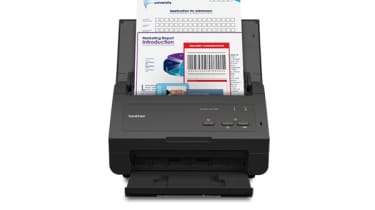 This is a quiet and clunk-free scanner which won't disturb any nearby workers. At low resolutions scanning was brisk, with 10 sheets of paper taking 32 seconds to pass through the device (18ppm). This was a little way short of the claimed 24ppm, however.

Depending on the output settings, the post-job processing slowed things down further. This was particularly the case with double-sided scans to searchable PDF files, where the processing contributed 63 seconds to the 95-second total job time much slower than competing devices.

Whilst the de-skew worked perfectly, the page orientation feature occasionally misfired, even once failing to orientate a simple page of black text.

Our tests can't reproduce the volume of work a typical document scanner can expect to encounter, so we aim to reveal any potential reliability issues by repeatedly capturing the same mix of high and low quality paper.

Part of our test involves scanning glossy paper cut from a magazine. The ADS-2100 is the first scanner which has encountered a significant problem during testing. After 15 passes we experienced two multifeeds; the first where all four sheets of new A4 were pulled through at once, and the second where a thin sheet was mistakenly picked under an A4 sheet. In both cases, however, the scanner detected the error and stopped, so no paper was damaged.

Document scan quality was generally good, with sharp focus and accurate colours, but we noticed bleed through when duplex scanning thin magazine pages, despite the presence of a removal option that's enabled by default. Whilst not a major problem, not all competitors have suffered this. Although capable of scanning photographs, the ADS-2100 struggled to reproduce subtle shade progressions, such as in blue skies or skin tones. Again, we've seen better in this class.

The ADS-2100 is a decent entry into the desktop document scanner market. We particularly like its direct USB scan feature, but the hardware and software are slow and there are a couple of omissions from the bundled apps. Overall it doesn't do enough to challenge Canon's excellent ImageFormula DR-C125, which costs roughly the same yet is faster and has a higher daily rating of 1,500 pages. We also found the Canon produced better results and it was easier to use it remains our recommended scanner in this class.

The unique scanning-to-USB feature in the ADS-2100 isn't quite enough for us to recommend the device considering poor image quality, slow speed and a low daily usage rating let it down.