Dell’s cloud server squeezes four Xeon E5-2600 systems into 2U of rack space. Dave Mitchell finds out if the PowerEdge C6220 can be used as a high density alternative to individual blade servers. 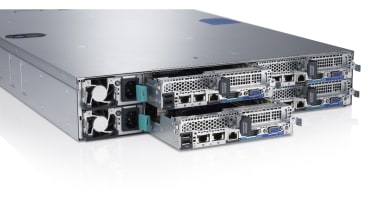 Basic storage options are provided by the motherboard's Intel C602J chipset which offers six 3Gb/sec SATA II ports and supports mirrors, stripes and RAID-5 arrays. Dell has an optional LSI 9265-8i PCI-e card which adds SAS to the mix.

Each node has a mezzanine card connector as well. Dell offers an LSI 2008 SAS card plus Gigabit and 10-Gigabit options but bear in mind this slot is only active in dual CPU configurations.

The chassis has room up front for up to twelve hot-swap LFF hard disks. The backplane is split vertically into four groups so each node has three dedicated drive bays assigned to it.

Dell offers a chassis version with 24 SFF bays so each node can have six drives. A new feature of this model is an expander backplane option that allows any number drives to be assigned to specific nodes regardless of their physical location. 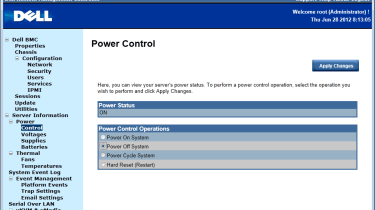 The chassis has room for a pair of hot-plug power supplies and our system had two 1200W modules. Dell also offers a 1400W option for heavier workloads.

To test power consumption, we hooked the C6220 up to our inline power meter. With each node loaded with Windows Server 2008 R2 and idling along we saw first, second, third and fourth nodes draw a total of 135W, 200W, 290W and 350W, respectively.

Using the Sisoft Sandra benchmarking app to push the CPUs to maximum load on each node we saw power peak at 364W, 671W, 945W and 1242W. Dell estimates the C6220 will save you around 100W of power over four servers.

In our review Boston Value Series 380 G8 which has the same CPUs and memory configuration, we saw it pull 162W in idle and 349W under extreme load. An average peak of 310W per node for the C6220 shows power savings can be made.

The C6220 is reasonably well constructed but not to the same level as Dell's standard PowerEdge servers. All cooling is handled by four fans behind the disk backplane but these are not hot-swappable and don't have integral power connectors. 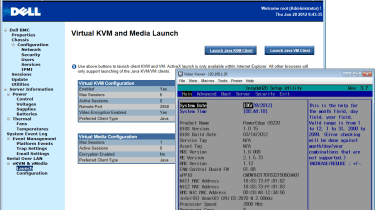