LaCie has incorporated a 2GHz ARM processor and 256MB of RAM into this NAS to help cater to the needs of SMBs. But is this smart-looking device worth more than £400? 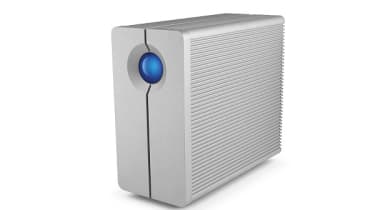 The 2big NAS aims to straddle the home and small office markets by mixing high capacity and Gigabit Ethernet connectivity with easy-to-use software.

The LaCie 2big supports many of the protocols we'd expect from a small business NAS. File server support includes SMB, AFP, FTP, SFTP and NFS, as well as HTTP and HTTPS web access. Elsewhere, the LaCie also handles BitTorrent, Apple Bonjour, NTP, iSCSI and more. The 2big works as both UPnP and iTunes servers, and it's also possible to use the device as a print server.

It's all powered by an ARM processor which runs at 2GHz, and it's partnered by 256MB of RAM.

There's the one Gigabit Ethernet connection, and the two hard disks inside can be configured in both RAID 0 and RAID 1 mode, with 5.44TB available when using the former setting and 2.72TB of room when the latter mirrored mode is enabled. The disks themselves are 3TB Seagate Barracuda drives, which use the faster SATA 6Gbit/s interface and pack 64MB of cache, so bottlenecks should be kept to a minimum.

The LaCie isn't the quickest drive we've seen, but its speed should suit the needs of a small business. It's faster in its striped RAID 0 mode: its large file write and read speeds of 59.6MB/s and 72.4MB/s outpaced the same tests in RAID 1, where the drive scored 46.8MB/s and 67.1MB/s.

The same pattern was seen in our small file tests, although the LaCie was slower here. In RAID 0 it wrote and read small files at 5.1MB/s and 22.3MB/s, with these figures dropping to 4.2MB/s and 17.6MB/s with RAID 1 enabled.