The iPad is now flying your plane

Inside the Enterprise: The aviation industry is still struggling to make a profit. That makes IT all the more critical. 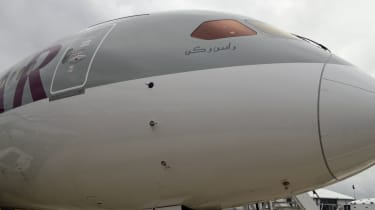 Any would-be aviator who has tried out Wingman, or attempted to fly Parrot's AR.drone will testify that controlling an aircraft from a tablet or smartphone takes plenty of practice.

The iPad, in particular, is playing an increasingly important role in aviation. Controlling a commercial airliner might still be some way off, but tablets are being used as interfaces and control surfaces for military and civil drones, or UAVs. The devices are also starting to replace the large volumes of paperwork that accompany flights.

This year's Farnborough air show demonstrated some of the pressures airlines are under to cut costs. With the possible exception of Sir Richard Branson's Virgin Galactic, the emphasis was more on money-saving measures, such as aircraft wingtips that save fuel, than on glamorous new technology.

And IT is central to making airline operations more efficient. The new Boeing 787, for example, uses 20 per cent less fuel than similar sized planes. But manufacturers are also addressing operating costs through technologies such as electronic flight bags.

These are applications for devices, especially the iPad, that gather together all the paperwork and information pilots need for a mission. The 787 supports the electronic flight bag, and electronic log book, as standard. But the plane is also "e-Enabled", to use Boeing's parlance. This allows pilots and engineers to set up the aircraft remotely, rather than having to use discs to download aircraft data.

According to Graham Chisnall, MD for aerospace at ADS, the industry body that runs Farnborough, tools such as electronic flight bags are critical to improving airlines' operations. Low-cost and short haul airlines, in particular, stand to benefit from more efficient set ups and shorter turnaround times between flights.

There are other areas where airlines are turning to technology, from route planning and reservations to maintenance and equipment management.

The annual Airlines IT Trends survey from airline IT provider SITAsuggests spending has remained stable this year, and around half of the carriers expect to spend more in 2013. New areas of investment range from operational infrastructure, such as electronic flight bags and crew rostering, to social media tools.

And, over time, aviation will become increasingly automated. It may be 20 years or more before a civil airliner will fly itself, but many of the supporting services are already electronic.

For most European airlines, paper tickets have been replaced by electronic ticketing and boarding passes, and check-in desks with kiosks or mobile phone apps. Already, at some airports, passengers can opt to receive updates about gate changes or delays on their smartphones. All these measures help airlines to manage costs and for busy airports, such as London Heathrow, to manage capacity.

But with airlines facing rising costs, especially from fuel, airlines are likely to use IT to restore their battered margins. Sadly, for passengers, cost savings might not translate into cheaper fares any time soon.