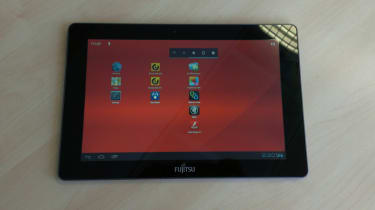 The M532 is pre-loaded with productivity-boosting apps. These primarily come in the form of Citrix Receiver and VMware View virtualisation offering, which provide remote access to Windows.

The inclusion of the virtualisation apps will appeal to business users who want more than just content consumption. Even though Windows 7 isn't optimised for touch screens, navigating programs such as Word and Excel through gestures worked reasonably well.

When using Windows, via the Citrix Receiver app, a long press mimics a right mouse click and there are icons that allow you to bring up a mouse pointer and keyboard at anytime.

We found apps like Word were usable over 3G but heavy duty imaging apps, such as Architectural Design or Watercraft Design, were close to unusable over a mobile network. The device warns you when the connection is "slow" and it can take a few seconds to register a word after you have typed it.

Even over Wi-Fi, the heavy duty design programs can be fiddly to use, especially when they have been designed to be navigated with a mouse.

Other pre-loaded apps include ThinkFree Office and TouchDown email client. ThinkFree Office is, essentially, a basic version of Word, which allows you to view, edit and create documents on the move. We found it best to view documents in portrait as the keyboard is small and can be used with two hands. In landscape mode, the keyboard takes up half the screen so your limited to seeing a couple of lines of text at a time and can only type with one hand.

TouchDown is another useful app, which tries to mimic the layout and options provided by the desktop version of Outlook. There are a number of shortcuts for example you can quickly filter email by date, importance, flagged and by those containing attachments.