A big 44cm NAS appliance, the 10-bay N10850 is cheap, fast and packed with features. However, build quality and design let it down. 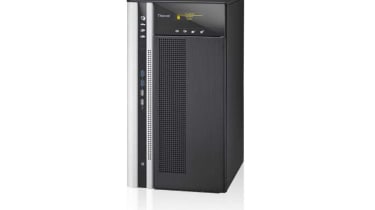 Most NAS appliance vendors are seeking to make their desktop boxes ever smaller, Thecus has gone in the opposite direction with its TopTower systems. The N10850 is one of three new desktop appliances and this 10-bay box is imposing.

Standing at 44cms high, the N10850 towers above the competition. Qnap's TS-1079 Pro, for example, also has ten hot-swap drive bays but is half the size at 22cms. 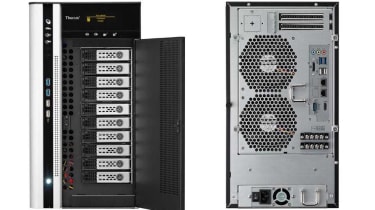 The appliance may look impressive but closer inspection reveals disappointing build quality. The metal door on our system wouldn't pop open properly; it kept catching on the vertical brushed aluminium panel alongside it.

Adding expansion cards will test your patience as well. The two PCI-e expansion slots at the top support a small selection of 10GbE adapters but to get at them requires both side panels and the top to be removed.

Memory upgrades are possible as the motherboard can be slid out from the rear to provide access to the two spare DIMM slots. It was during this inspection we noticed the hard disk backplane wasn't seated properly on its mounting lugs and had to be removed and repositioned.

The N10850 isn't the best choice for 10GbE networks as Thecus has focused mainly on supporting direct attach copper connections. It has certified Emulex OCe11102-NX and Intel X520-DA2 adapters but not the fibre versions.

Thecus also recommends that you use its own C10GT PCI-e card to avoid compatibility issues. This provides a CX-4 port for short range connections over copper and an SFP port for longer fibre connections.

We tried installing an Emulex OCe11102-NM dual port 10GBase-SR adapter and although the appliance spotted it, we were unable to achieve a link to our 10GbE test servers. We also found the card often disappeared from the web interface when the appliance was rebooted. 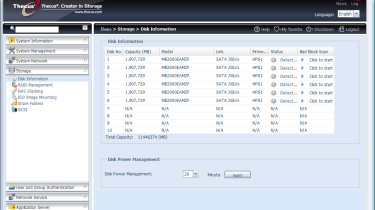