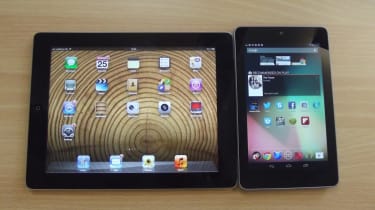 Acer, Asus, HP, HTC, RIM and Samsung are just some on the manufacturers which have tried and failed to unseat the Apple iPad as the king of tablets.

Amazon has had success with its budget Kindle Fire, but has limited the device to the US audience thus far. In an attempt to gain traction in the tablet market, Google has followed suit by releasing a 7in device at a cut price. The result is the Nexus 7, which has a starting price of 159.

IT Pro has put the Nexus head-to-head with the iPad in key areas including performance, battery life, screen, operating system, apps, design and value for money. Find out if the latest Android device can succeed where so many others have failed.

The Nexus is around half the price of the iPad, so it would be natural to assume the iPad offers better performance. However, this isn't the case.

Google has drafted in Asus to build the Nexus, and the Taipei-based firm has form for building quality devices such as the Transformer Prime. Under the hood of the Nexus is NVIDIA's Tegra 3 chipset, which has four cores running at 1.3GHz and is paired with 974MB of RAM. It's as quick as tablets get at present and it shows in benchmark and real-world testing.

To test out the processing and memory we used the GeekBench app. The Nexus clocked a score of 1,494, one the highest on the market. In comparison, the more expensive Transformer Prime TF201, which also has the Tegra 3 chipset scored 1,550. It took 1.799ms for the Nexus to finish the SunSpider JavaScript benchmark, which tests web page loading times. These superb scores translate to butter-smooth transition and responsiveness. The Nexus is able to handle demanding apps effortlessly. 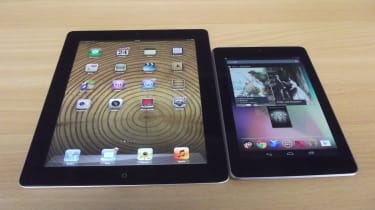 Despite being nearly half the iPad's size, the Nexus features a quad-core Tegra 3 processor and up to 16GB of memory

The iPad comes with a 1GHz, dual-core A5X processor and has a tad more available RAM at 988MB. However, it can't match the raw speed of the Nexus when benchmarked. The third-generation Apple device clocked a mediocre Geekbench score of 750, which may make it look significantly inferior, but this is not the case. It completed the SunSpider test fractionally slower at 1,803ms.

In terms of real-word usage there was little to separate the devices. It took the Nexus three seconds to load the BBC mobile site over an ADSL connection and five seconds for the full desktop site to load. The iPad took four and five seconds respectively. During testing we noticed the iPad start to stutter when we came to running resource-hungry games such as Infinity Blade II and Real Racing HD.

The Nexus 7 pips the iPad in the benchmarks thanks to the NVIDIA Tegra 3 chipset, although real-world performance is closer than they suggest. Both devices have a super-smooth interface and the performance difference will only be seen in top-end applications and games. The iPad juddered a little in demanding, 3D games - a bad sign if you want to run intensive graphical apps for work.