With 18 micro servers crammed into a 4U chassis, the Serverous C1840SS is a good choice if reduced power consumption and a high rack density are priorities. 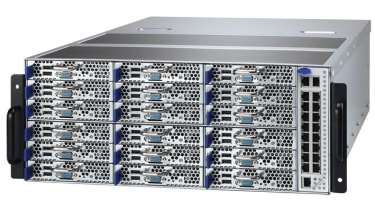 High server densities were once the domain of blade servers but these can't keep up with the demands of cloud computing. The latest micro servers such as the Serverous C1840SS look set to take over as they offer a higher server count in a smaller space.

Utilising Intel's low power Xeon E3 processors, the C1840SS packs in eighteen micro servers into 4U of rack space. The system is based on Tyan's FM65-B5511 system which is this Taiwanese manufacturer's first high density cloud computing platform.

The chassis provides a solid foundation that can be populated as required. Serverous offers a starter kit with six server nodes and you can add more as demand dictates. The price we've shown for the system on review includes nine server nodes. There are three 800W hot-plug supplies and these are 80+ Platinum rated. The bulk of the rear panel is taken up by eight hot-plug fan modules. 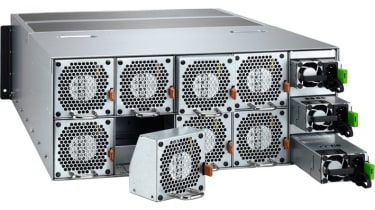 The server nodes are 37cms deep but manage to pack a decent specification. The processor is located at the front and mounted by a solid aluminium heatsink.

Our nodes were all populated with E3-1220L Xeons which have a low TDP of only 20W. The thermal headroom for each node is defined by Tyan as 45W so these modules are well inside this envelope.

Four DIMM slots sit alongside with our nodes each sporting 2GB of DDR3 memory. The maximum memory for each node is 32GB and only the unbuffered UDIMM variety is supported. 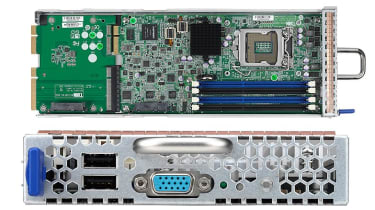