A hybrid Android Ice Cream Sandwich device, which features a 10.1in Super IPS+ display, an NVIDIA quad-core processor, but has a steep £600 asking price. 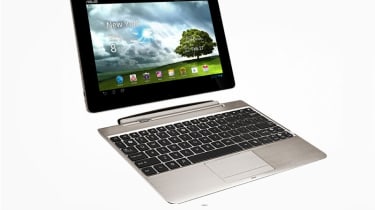 A trackpad completes the tablet-meets-laptop design and, like the keyboard, it doesn't feel as if Asus just tacked it on to differentiate itself from the iPad. The moment you run your finger across it, a mouse cursor appears like in Windows 8, which proves useful when you need to insert a couple of letters into a word - a task that can prove fiddly when using touch. A long button at the bottom also proves its worth, as a left click selects an option and the right takes you back a step. Although the mouse buttons are not separated, we never found ourselves pressing the wrong side. 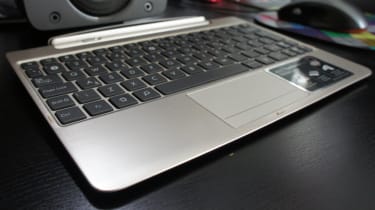 The keys take time to get used to, but make content creation much easier

A keyboard and trackpad wouldn't be useful if there's nothing to use them with. Asus has preloaded the Infinity 700 with Polaris Office and SuperNote, allowing you to create basic documents with little fuss. Polaris Office is basic and we found ourselves using the Google Drive app to access Google Documents. As a portable Android tablet we lent towards using the cloud, especially when you can view documents offline. But if you wish to edit them, you'll end up back in the arms of Polaris Office because you can only edit offline Google Documents via the Chrome desktop browser. Also, some Google Documents such as Google Presentations cannot be viewed offline.

Running Android 4.0 Ice Cream Sandwich, the Infinity 700 is out-of-date as the Nexus 7 is shipping with 4.1 Jelly Bean. Asus has announced its Transformer range will be getting the upgrade in the "coming months".

For a device that costs 600 you'd expect the latest software to be pre-loaded. But Ice Cream Sandwich isn't too far behind. It's fast and it's multi-tasking capabilities surpass the equivalent for iOS and Windows Phone. Nearly all settings can be quickly accessed from the bottom right menu, too, which saves burrowing into the correct option menu - something we found ourselves doing a lot on older Android devices.

A number of shortcuts have been added to the home screen, so you can quickly jump to the browser, YouTube, Camera, Gallery, SuperNote, Play Music, Play Store and Gmail. Should you want to be more efficient, Android, being the highly customisable, allows you to tailor all shortcuts. So whether you want a weather widget or just a link to all your most used applications on the home screen, or on any of the four other displays accessed by swiping either left or right, a simple press and hold will usually bring up the relevant customisation options to do this.