Dell has kitted out its latest all terrain business laptop with Ivy Bridge chips and plenty of hard-wearing features, but it doesn't offer the level of customisation we're used to. 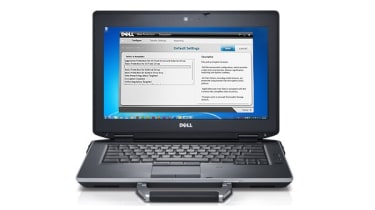 The interior is unflashy, but it's full of well-thought-out touches. The base is held on by a multitude of screws, and the wireless card is slotted into a half-height mini-PCI Express socket - and there's two more free, too, with the slots crammed into a tiny space, with one aligned on top of the other.

One free SO-DIMM slot sits on top the occupied socket, and Dell has taken care to ensure that the Latitude is well-protected. Cables are shrouded throughout to lend them an added air of protection, and even the spare wireless antenna is aided by a plastic cover.

The Latitude ATG impresses when it comes to hard-wearing design, but we can't say the same for the specification. Processing power comes from a Core i5-3320M. It's one of Intel's latest Ivy Bridge processor, running at 2.6GHz, and its two cores use both Hyper-Threading and Turbo Boost, so the chip can address four concurrent processing threads and overclock itself to 3.3GHz when extra power is required. 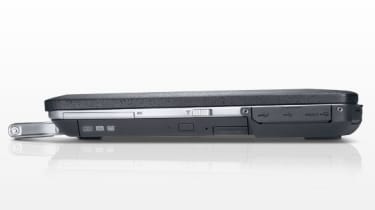 The chassis packs in 4GB of RAM and a six-cell 5,400mAh battery as standard

This sounds impressive but a benchmark score of 0.69 is just above average. It means the Latitude will cope with office applications, but task the ATG with any more demanding design software and it'll struggle.

There's four gigabytes of RAM, storage comes from a Samsung 128GB SSD and, while Dell's retail models will be available with an NVIDIA Quadro NVS 5200M, our review sample includes Intel's HD 4000 integrated graphics core. The latter chip scored 22fps in our Low-quality Crysis test, but we've got more hope for the NVIDIA chip it's one of the firm's most powerful mobile Quadro parts and should put paid to even intensive graphical applications.

The six-cell 5,400mAh battery included as standard offered up good battery life in our light use test, with more than eight hours of usage from a single charge not far behind the latest MacBook Pro, which lasted for 10hrs 34mins in Apple OS X. In our heavy use test, though, the Dell couldn't recreate this form running out of after just 1hr 41mins.