Fujitsu's ScanSnap S1300i is compact, able to scan up to 12 pages per minute and interact with cloud services. 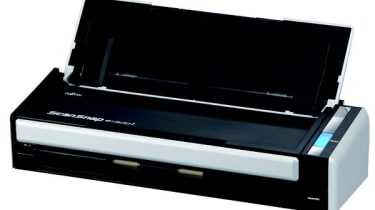 Our initial experiments were blighted by a couple of paper jams, attributable to dents put into our regular test documents by the last scanner we tested. We had no further problems after replacing the documents with a new set, but the jams confirm it's easy to clear the wide-opening mechanism should the worst happen.

As a low-power, portable device, the S1300i is far slower than a typical desktop document scanner, but it's competitive in its class. Scanning single-sided colour pages at 150 dots per inch (dpi) it managed a maximum of 9.7ppm, which is a big improvement on the 5.5ppm we measured in an equivalent test on its predecessor. There was no slow down when capturing in duplex, a result of 19.4 images per minute.

With OCR enabled physical scans completed in identical times, after which there was a separate processing time. On our 10-page duplex test (which includes four blank sides), the total time to produce and save a searchable PDF document was exactly two minutes.

Scanning photographs at the maximum 600dpi resolution was far slower, however, with the scanner taking just over six minutes to complete a stack of 10 thick, postcard-sized images. While not crucial for a business device, this test underlined this scanner's good image quality, and revealed Fujitsu's quoted 104gsm maximum paper weight is rather conservative.

We were generally pleased with the quality of office document scans, although we weren't impressed with visible artefacts at the driver's default mid-level compression. Tweaking the setting in ScanSnap Manager produced much better results. We did notice the auto-orientation wasn't foolproof, with even some simple pages of black text catching it out.

The S1300i builds on the success of its predecessor and is another strong addition to the ScanSnap range. It's a smart, swift and practical device which is noticeably faster than before. These days, however, it faces rather stiff competition, not least from Canon's excellent ImageFormula P-215, which has near-identical features and costs the same.

Whilst the Fujitsu S1300i just edges ahead of the P-215 on scan speed, Canon's device comes with faultless and fluid software whichincludes TWAIN/ISIS drivers. The ScanSnap S1300i is a good choice, but we'd opt for the Canon.