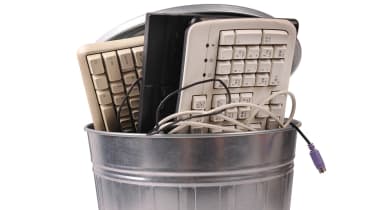 A new EU directive came into force that sets a target of recycling at least 85 per cent of electronic equipment waste by 2020.

The Waste Electrical and Electronic Equipment (WEEE) regulations are in place to prevent harmful materials from polluting the environment. The directive also forces manufacturers to recover rare metals used in computers, laptops, smartphones and other electrical devices.

The original directive, brought in ten years ago, set out a minimum of 4kg of electrical waste to be recovered for every person in the EU. However, this is around only a fifth of the waste generated in the EU every year.

The new, tougher laws mean that by 2016, 45 per cent of electrical equipment sold has to be recycled. By 2020, the collection target rises to 85 per cent or 20kg per person within the EU. The law has also been expanded to include all types of e-waste, rather than just certain categories.

"In these times of economic turmoil and rising prices for raw materials, resource efficiency is where environmental benefits and innovative growth opportunities come together," said EU environment commissioner Janez Potocnik. "We now need to open new collection channels for electronic waste and improve the effectiveness of existing ones."

Potocnik said he would like to see all countries within the EU meet new targets before the formal deadlines. As present, EU member countries will have to amend existing WEEE legislation to align with the new rules by 14 February 2014.

By 2014, large retailers with a shop floor space greater than 400 square metres will have to accept small items, such as mobile phones for free without customers being forced to buy new products.

The new directive also clamps down on illegal waste being exported outside the EU. Equipment no longer warranty cannot be exported to non-OECD countries if it hasn't been certified to be working and properly documented. This is to prevent waste equipment being dumped on developing countries