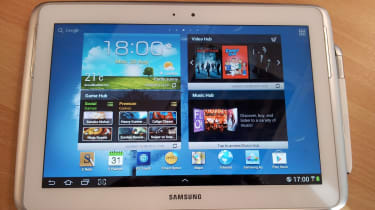 The 10.1in screen may be great for watching video and browsing the internet, but it's hard typing on screen or writing with the stylus, whilst holding the device with one hand.

Despite Samsung's best efforts to keep the weight under 600g, it will feel heavy in one hand, especially in landscape mode. With a thickness of 8.9mm, the tablet will fit into a bag comfortably, and you can carry it around all day. But it does lack the portability of a 7in device such as the Nexus 7, which will fit into large pockets.

The Note 10.1 is the latest Samsung device to include a stylus in an attempt to differentiate it's devices from the iPad. Sliding the stylus out of the bottom left hand corner will trigger a panel to appear along the right side listing the programs you can use in conjunction with the pen. These include S Note, S Planner, Crayon Physics, Photoshop Touch and Polaris Office.

The device can be configured to immediately open any of the above apps as soon as you remove the pen from its slot - a neat feature we like. 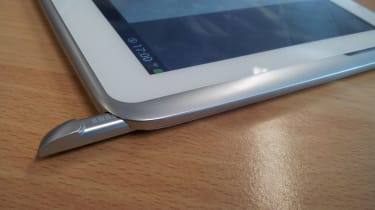 The stylus is pressure sensitive, which is useful for users who want to create images as shading and lines can be drawn nearly as accurately as on natural canvas. The design is also able to differentiate between finger and stylus input. This means resting your palm on the surface won't accidentally trigger squiggles all over the page when using the pen.

However, things aren't as smooth when you start using the stylus. The flagship S-Note app is clunky. You'll spend most of the time prodding away at the options than writing, and we didn't find it intuitive.

Writing in freehand mode is the best way to input text, as you are unrestricted as to where you can write. The device does have a handwriting recognition mode, but the accuracy of this will vary depending on the how neat your handwriting is. As it's difficult write neatly, especially at speed, we found it best not to rely on this feature.

We also found that it's difficult to edit anything once it's been converted into font. We were only able to draw over text once it was recognised and not edit it. 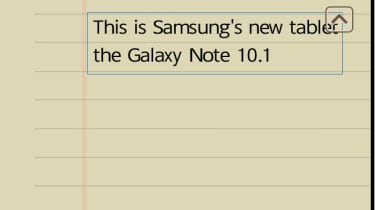 Despite being marketed as useful, we'd only ever use the stylus to take notes in an emergency, and it's best suited for drawing or annotating documents.

When it comes to functionality, the Note 10.1 is essentially a larger version of the Galaxy Note smartphone, which itself is a hybrid device as it has a large 5.3in display.

The 5.3in Note is able to strike a balance between the tablet and smartphone form factor, and means users would be able to go without needing a tablet. Unfortunately, the Note 10.1 is unable to do the same.

In theory a device such as this would be suitable for deployment in vertical markets such as healthcare, hospitality, insurance, legal and retail industries, due to the annotation capabilities offered by the stylus. However, this depends on the right apps being made available and in reality we envisage users would be more comfortable with a smaller device such as the Nexus 7 or the iPad, which comes with a superior selection of applications at this time.