This multi-node server packs a massive rack processing density and at a shade under £10,000, it's a highly cost effective alternative to blade servers. 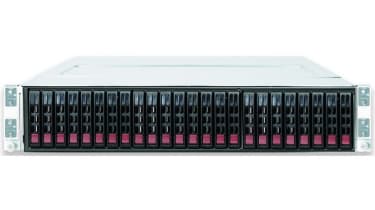 Power and SATA interfaces for each node are routed through to an extension bar on the side of their case. As you slide the node into place, this mates with the chassis backplane allowing the node to receive power and hard disk storage. 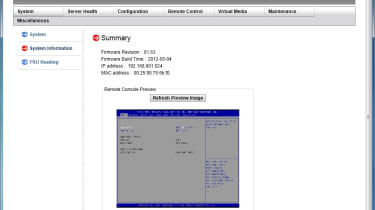 The front of the system is packed out with 24 hot-swap SFF hard disk bays. These are separated into four groups on the backplane so each node is allotted six dedicated drives. RAID options are good as the Intel C602 chipset supports mirrors, stripes and RAID-5 arrays.

The rack brackets on each side of the drive bays incorporate illuminated power buttons for each node. These are accompanied by UID LEDs for visual identification plus network and temperature warning lights.

All internal cooling is handled by four large fans located between the drive backplane and nodes. These all run no matter how many nodes are fired up and they aren't hot-swappable so the entire system will need shutting down to replace a failed unit. 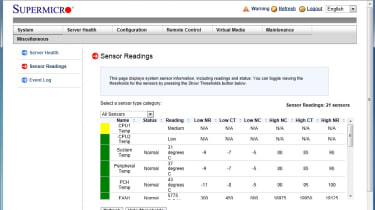 Power is handled by a pair of 1620W hot-plug supplies mounted in the centre of the chassis and their combined output is shared across all nodes. The Quattro may have a meaty specification but we found it to be quite frugal in the department.

To test power consumption, we hooked the Quattro up to our inline power meter. With each node loaded with Windows Server 2008 R2 and idling along we saw one, two, three and four nodes draw a total of 121W, 178W, 265W and 300W.

Using the Sisoft Sandra benchmarking app to push the CPUs to maximum load on each node we saw power peak at 314W, 553W, 792W and 1040W respectively. This compares extremely well with Dell's PowerEdge C6220 as its quartet of nodes and their E5-2670 Xeons pulled a noticeably higher 1242W under full load. 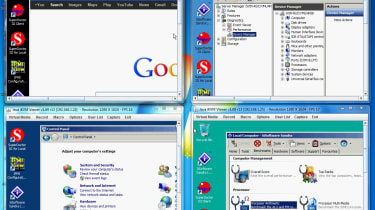