Is the humble phone call dying?

New figures suggest that, for the first time, voice calls are in decline. Is this the start of a long road downhill? Simon Brew takes a look. 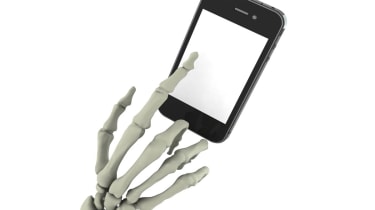 Some facts. According to a recent report by communications watchdog Ofcom, the average British citizen is sending 50 text messages every week. That's twice as many as we were sending in 2008, which itself - for a reason we'll come to - was a notable year for texting.

Furthermore, 39 per cent of adults own a smartphone. And, interestingly, mobile voice calls are apparently now in decline for the first time ever. As more and more people move towards text messaging, and communicating online, the humble phone call has dropped in popularity.

If anything, it's perhaps a surprise that phone calls have been growing all this time anyway, given the plethora of alternative technologies that have been available. The humble-ish mobile phone has been texting for long past a decade, too. In fact, in 2008, text message usage officially topped mobile phone calling for the first time (this didn't include landlines, though). And yet the number of calls, in spite of being one of the most expensive communication methods, has been on the up. But no longer.

The irony here is that the phone call has been repeatedly blamed for damaging face-to-face communications. However, there's inevitably a question to be answered as to whether the future will involve us interacting by talking to each other, at least vocally, less and less?

The immediate point of note is that the phone call isn't going anywhere. It's evolving. Technologies such as Skype - which is now being worked into the upcoming edition of Microsoft Office, thanks to it being bought up by the Redmond-based giant - have migrated the phone conversation away from telephone lines to VoIP technology. Furthermore, Skype brings video calls to the fore as well, for less money than it costs for a traditional telephone conversation.

If you factor Skype conversations into the latest figures, then we'd wager that voice communications aren't in decline at all. In fact, it appears that landlines have been excluded from the statistics anyway. If they were included, would the voice call numbers really be in decline, we wonder?

That aside, what's also clear is that people are seeking out more ways to make their voice calls. What about iChat, and video conferencing services? Don't they count as voice calls to a degree? Even that notwithstanding, though, voice calls, in their traditional sense, are still dominant. They're so universal that even if they started a terminal decline from this point forwards, they're going nowhere in any of our lifetimes. Several times in recent years has the death of the voice call been announced, but that's come as news to those who still rely heavily on the humble telephone.

On top of that, there appears to be an inherent assumption that people will want to stop making voice calls. But is that actually so? The parallel here is surely posting a letter. In spite of the fact that e-mails have been around and accessible for the best part of two decades, the postal service still has no shortage of business. And not just from people awaiting Amazon parcels. Letters still very much have their place, and if anything a premium to them (in more than one sense). It's certainly not just those resistant to technology who continue to use the traditional post.

Should phone calls die out though?

Appreciating that the latest signalling of the end of the phone call appears to have been called incredibly early, it is still worth considering if the end of the technology would be a good thing. That's not to suggest a world where people don't talk to each other, but instead, some interesting changes could occur.

After all, for the business world, there's a tangible advantage to the decline of the phone call, in that it allows firms to switch to more cost-effective - and arguably controllable - means of communications. It's little secret that call centres have been outsourced to the other side of the planet to help keep telephony costs down. If more and more customers choose electronic methods of communications, then, in theory, there could be shrinking expenses on the horizon as a consequence of that. Not too many businesses will turn their nose up at that.

Yet even that is countered by the fact that many businesses work on a more personal touch, on offering the opportunity to talk to people directly about something. A properly used phone call can always convey a lot more than a text message. That doesn't overcome the slowly growing take-up of Skype, but then there's still long, long way to go there, too. At the start of 2012, there were 31 million Skype users worldwide. The number who were regularly using the service is far lower than that. And that's a minuscule amount, compared to more traditional voice calls.

It's an easy conclusion to call, perhaps, but just because the voice call may or may not have peaked, it's so ingrained in modern day society, that it's going to need two or three generational shifts to even begin to stop phone calls being used as a taken-for-granted technology. What will change, and perhaps render the current batch of statistics moot, is the methodology by which phone calls will be made.

VoIP seems a logical, economical technology by which to take on some of the heavy lifting of voice exchanges, and a migration to services such as Skype (especially when Microsoft puts some proper muscle behind it) seems inevitable, in one form of another.

Furthermore, there's a suite of communications technologies now that are complementary, and suitable for different purposes. So, just because more text messages are sent than phone calls made on mobiles, that doesn't mean that a text is the best approach for everything. Both in business and the consumer worlds, there are more options than ever before.

What the latest batch of statistics seems to say, if anything, is that people are communicating as much as they ever have been. It's just that they're looking at different ways of doing so, too.