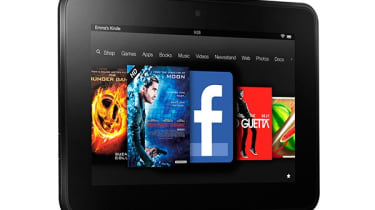 Amazon CEO Jeff Bezos has unveiled a raft of devices including multiple successors to its Kindle Fire tablet and e-readers.

The Kindle Fire HD will come in two sizes 7ins and 8.9ins. Although the UK will receive only the small version.

The UK specific 7in Kindle Fire HD will include:

Software The re-skinned Android OS will come with specially designed Facebook and Skype apps and an improved email client. An X-Ray feature, which is powered by IMDB will allow you to tap on any actor's face during a movie or television show and will bring up information such as filmography. Amazon's Whispersync technology has also been improved - it now syncs between ebooks and audio books. As well as remembering which chapter you've reached in a book, the device will also allow you to continue playing games from where you left off.

Battery life - up to 11 hours with the wireless off.

The Kindle Paperwhite was debuted and will satisfy users who primarily want to consume books on the move.

Specifications of the 213g device include a backlit capacitive touch display (212ppi) and a contrast ratio 25 per cent higher than the previous model. Amazon claims the device will last up to eight weeks on a single charge.

The Paperwhite is available for order today for $119, and the Paperwhite 3G is on offer for $179. Both will begin shipping on 1 October.

For those on a budget, Amazon will also be offering a basic Kindle for $69 for the 14 September.