How to work your way up to become a CIO

You are an IT professional with a good set of skills and a strong desire to move up the career ladder. How can you develop your capabilities and potentially climb towards the heights of senior IT executive or CIO? 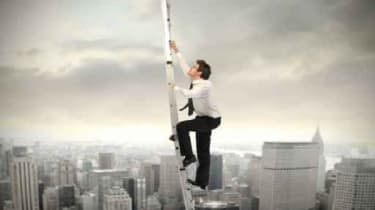 The continued importance of digital technology to modern businesses should mean ambitious technology professionals have a better opportunity than ever before to stake a key role in their organisation. However, IT suffers from a perception problem and technology careers are still undervalued when compared with other line-of-business areas.

I'd like to say I'd created a careful plan but careers evolve.

Skills body CompTIA suggests as many as 93 per cent of employers believe there is a significant difference between existing and desired IT skill levels. Almost half of IT professionals, meanwhile, believe the dynamic nature of the technology industry is a primary cause of the skills gap. A lack of professional development is also cited as a major concern for technology workers.

IT professionals looking to eventually become a CIO, therefore, face a tough mix of perception problems, skill concerns and training issues. But it is not all bad news. Some technology professionals have blazed a path towards the executive top table, while simultaneously proving the value of technology and adding other areas of responsibility to their job role.

Ian Gausden, chief operating officer at payments finance specialist VocaLink, is one such individual. Gausden has made the successful transition from a full-time IT professional to a business-focused operations executive. He spent 17 years at Barclaycard's technology department, before becoming a client director at service specialist Xansa in 2002.

Gausden returned to the end-user side in 2005 and became IT director at LINK, the network infrastructure operated by VocaLink. He subsequently became director of operations in 2007 and chief operating officer in 2010. "I'd like to say I'd created a careful plan but careers evolve," says Gausden, referring to his move from technology to broader business operations.

He says his taste for change began at Barclaycard, where he was part of a rapidly growing organisation. During his 17 year stint at the firm, the IT department grew from 60 to more than 600 professionals. The scale of operations undertaken gave Gausden the opportunity to try a wide range of IT skills, such as database administration and systems management.

"Hopping around gave me a lot of experience," he says, before outlining how he allied technology specialism to business training. Gausden completed a degree in computer science during his early days at Barclaycard. He has continued to look to further education, completing an MBA from Henley Management College and a certificate in company direction from the Institute of Directors.

"I've always been interested in professional development throughout my career. My mix of practical and theoretical experience has helped me advance. IT people that can tackle the business are still the exception," says Gausden.

"If you have skills in both areas, it can really help. The MBA helped me to realise how information management could help serve and improve business operations. Basically, I like to know what I'm talking about and you can't gloss over the facts when you're selling the importance of high-availability technology to the business."

Gausden's career path might seem more circuitous than that of the stereotypical IT executive. He says such change, however, comes with the territory for a technology professional that is looking to move beyond the confines of bits and bytes and into senior management. Technology professionals, unlike some of their other line-of-business counterparts, often suffer from undefined career paths.

While junior accountants might one day dream of becoming a finance chief, few IT professionals start their careers with the aim of eventually achieving the CIO position. Gausden says this perception needs to change. Technology is crucial to the modern business and the CIO role, despite regular assertions in the media to the contrary, is in no danger of disappearing.

"IT supports business operations," he says. "Moving around the technology team gives you the opportunity to learn about the whole organisation. Once you've learnt about the company, you're in a great position to be a general manager. The significance of IT means any talk of the end of the CIO role is premature. The IT director position is actually a great springboard to doing broader things on behalf of the business."

1.Concentrate on the real world context of your business. Being simply a great technologist is never enough. Your experience in the bits and bytes of IT must be transferred into a language that helps the business achieve its long-term growth objectives.

2.Make the most of every second. Be proactive when you are travelling. Top executives spend much of their time on the go; using the train rather than the car will give you more opportunity to deal with work activities.

3.Strike a balance between working and playing. IT can seem like a 24/7 activity but top people will burn out if they do not make room for downtime. Find time to get away from the problems and stresses of business IT.

4.Get the right team around you. Concentrate on developing good people with excellent experience. CIOs must put their confidence in their lieutenants and give them the responsibility to make decisions. Support their choices but challenge their thinking.

5.Understand as many facets of the IT professional role as you can. If you want to be a CIO, move around the various areas of the technology department. Develop as many IT disciplines as you can and do that as early as possible during your career.

6.Challenge yourself academically. Professional development might not be right for everyone but qualifications will give you the confidence and credibility to make decisions on behalf of the business at a senior level. Top people have a real depth and breadth of knowledge.

7.Keep your eyes on business objectives instead of internal politics. Rather than concentrating on protecting your turf, try and make sure your senior peers know how you are delivering to set business aims. Focus on achievable goals, rather than looking to act defensively or to continually expand your internal empire.