Lync 2013 improves on all the fundamentals and provides better resiliency, reliability and as well as the option to carry out conference calls on the move.

Microsoft has added a number of features within Lync client, allowing users the ability to do everything from initiate groups chats to carry out VOIP calls on the move.

Lync 2013 is available to download as a preview, and we take a look at the whether it is worth using this service as opposed to other commercial alternatives.

A key new IM-related feature in Lync 2013 is Group Chat, which was based on the MindAlign product which came from Microsoft's 2007 acquisition of Parlano. Although group chat was available in the previous version, in Lync 2013 it's now fully integrated. In practice, the Group Chat server is easy to install, a huge contrast from the nightmare installation process in earlier versions. 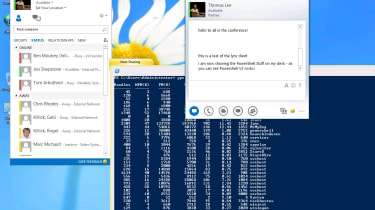 Much like commercial IM products such as Microsoft Live Messenger, AOL IM, Google Talk and Skype, Lync tells you when users login and their status update.

If a colleague or customer is busy, in a meeting or out of the office you can immediately see this via their status and not make potentially expensive call to their voice mail.

The contact features of the Lync 2013 client allow you to group contacts and the software integrates all details from Active Directory, Exchange and Lync itself.

Lync 2013's Conferencing feature enables users to create, participate and moderate both ad-hoc and pre-planned conferences. The Lync client provides the ability to share audio, video, as well as the desktop, white boards, and poll slides. Already a solid feature in Lync 2010, conferencing is now easier to use and manage.

Lync uses open standards such as H.264 SVC, to enable HD video conferencing. Whilst the bandwidth requirements will burn through mobile data allowances, there's no doubting this will be popular for those with high-speed connections in office environments.