We take a look at the pros and cons of the first Intel 2GHz device. Can it be a challenger to the Galaxy S3 and iPhone 5? 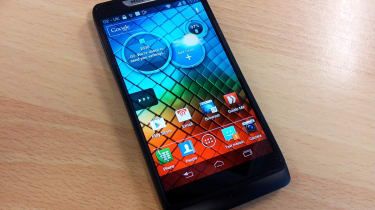 Motorola and Intel are pinning their hopes on the Razr i to lure users away from ARM-based handsets such as the iPhone 5 and Galaxy S3.

IT Pro has got its hands on the Razr i and here are our initial impressions of what it has to offer:

The Razr i offers up a 4.3in screen, but as it has an edge-to-edge design, this means the device has a smaller footprint compared to rivals such as the Galaxy S2 (also 4.3in). This allows the Razr i to fit comfortably into the palm of your hand. 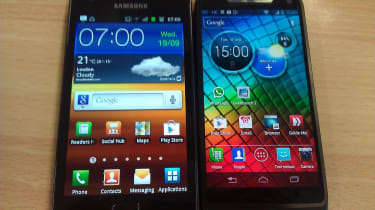 Despite having the same sized screen, the Razor i (right) looks smaller than devices such as the Samsung Galaxy S2. This makes the Motorola handset easier to hold

With Motorola claiming up to 20 hours of mixed usage, this is likely to be the stand out feature of the device and could be of potential use to business users.

It will be interesting to see whether the Razor i can beat the Galaxy S3 when it comes to long life. Samsung's device has been the only handset to last past 12 hours with our intensive battery life test, with 27 per cent of the battery remaining.

The Motorola Razr i is the first smartphone to break the 2GHz barrier in terms of processor speed. So far its benchmarks have shown it to be average compared to high-end competitors. The Android handset clocked a Geekbench score of 1007, which is less than the 1387 achieved by the Galaxy S3 and 1601 achieved by the iPhone 5.

However, it's real-world performance that counts and we'll be putting the device through its paces in our full review. 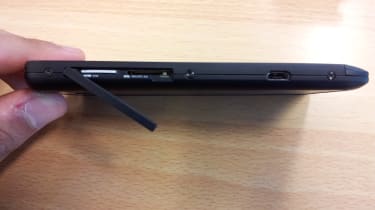 microSIM, microSD and microUSB slots are all located along the left hand edge for easy access

An 8-megapixel snapper is included on the rear. This comes with an easy to use menu that allows you to adjust exposure, picture modes and flash settings quickly. Coupled with this, the device is capable of starting up from a lockscreen in under a second, and it also has a 10 shot burst mode and HD video recording capabilities.

Behind the update curve

The device ships with Android Ice Cream Sandwich 4.0, which isn't the latest edition of Google's OS. Motorola made it clear the device will receive the Jelly Bean update, but the time-frame depends on Intel.

Official contract pricing is yet to be confirmed, and with the S3 already available for free from 31 per month, pricing of the Razr i will have to be aggressive to attract new users. 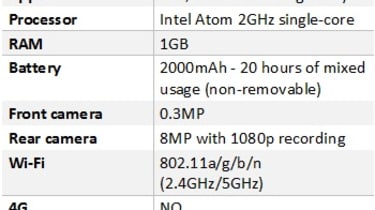 The Razr i could be one of the best Android phones in terms of performance and battery life. The design makes the device comfortable to hold, without sacrificing screen size.

If Intel can push out the Jelly Bean update quickly and the price is competitive, this could be a credible alternative to the S3 and iPhone 5.