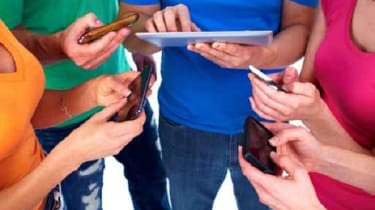 As the mobile computing wars heat up, chipmakers that supply the crucial components inside smartphones and tablets aim to grab more of the glory.

Not content to remain in the shadows of hot consumer brands like Apple or Samsung, chipmakers - including Intel, Qualcomm and Nvidia - want consumers to get to know the processors that power their mobile devices and build brand loyalty in the process.

Intel is leading the charge by extending its hugely successful "Intel Inside" marketing campaign beyond personal computers. Launched in 1991, "Intel Inside" stickers turned commodity electronic components into premium products, and eventually became ubiquitous on laptops.

This year, the Intel Inside logo has appeared on the backs of smartphones launched in the United Kingdom, India and Russia.

"Without a doubt, my goal would be to have consumers walk into stores and have Intel Inside as a key driver of which phone or tablet they choose, just like we've done in the PC space," said Brian Fravel, Intel's head of branding.

The world's top chipmaker dominates the PC market but lags smaller competitors in the fast-growing mobile industry. Intel is flexing its branding muscle to try to catch up.

It remains to be seen how many handset manufacturers agree to put the Intel Inside logo on their devices. For emerging smartphone brands, with little name recognition of their own, partnering with Intel may be a "no brainer." At the other extreme, Apple refuses to share branding with any of its suppliers.

That's not an easy thing to do in the mobile space where people aren't accustomed to it.

The highest-profile smartphone maker so far to use Intel's branding is Google's Motorola Mobility, which launched the Razr i in London on 18 September.

Until now, space on most smartphones has been reserved for the vendor, such as Apple or Samsung, and carriers like Verizon Wireless.

Providers of operating systems, such as Google's Android, also covet consumer loyalty - their logos sometimes appear briefly on screens when devices are turned on.

A logo-happy approach to smartphones and tablets, though, would run the risk of confusing consumers with what some experts call the NASCAR effect.

As a rule, it's seen as a good idea to add extra branding to products only when the additional brand strongly conveys a quality that the handset maker's own brand lacks.

"Can you generate end-user demand for your processors? That's what they're all looking at, and that's not an easy thing to do in the mobile space where people aren't accustomed to it," said Jack Gold, a tech industry analyst at J. Gold Associates.

Part of the reason the Intel Inside campaign has been unrivaled in the chip industry is that no one else can match Intel's $2.1 billion annual budget for advertising and marketing. Intel helps pay for the PC makers' own ads, as long as they include Intel Inside.

A TV ad promoting a phone launched by Orange in the United Kingdom in February features a supersonic car driven by a dark-clad pilot whose clothes are emblazoned with Intel Inside.

"It wasn't as though these were tech-savvy people who were reading all the benchmarks. They said Intel Inside meant performance to them," Intel's Fravel said.

Along with Qualcomm, Samsung is a major producer of mobile processors, most of which it manufactures on behalf of Apple's iPads and iPhones. Texas Instruments and Broadcom also make mobile processors, but do not advertise much to consumers.