Updated: The most beautiful and powerful iOS device to date, the iPhone 5 packs a gorgeous 4in screen and dual-core power. 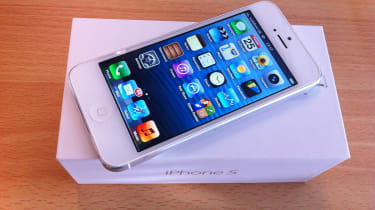 The most talked about feature has been the introduction of Apple Maps, at the expense of the popular Google Maps service. Apple built its own service from the ground up with the help of TomTom, but the reception has not been positive and the firm is scrambling to fix the kinks.

Apple Maps does try and mimic all the functions of Google Maps providing standard, hybrid and satellite views as well as free turn-by-turn navigation. It's poor though - with the device unable to locate our office and accurately. When searching for a location the device also automatically goes to the first location, and doesn't seem to take into account your position. A search for Luton, will lead you to Luton by Exeter, rather than the town just outside of London. 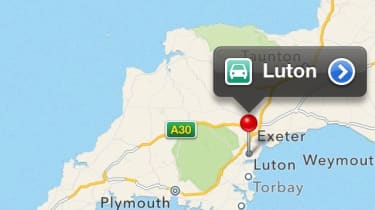 This isn't the Luton we were expecting

Siri has been beefed up and is now able to provide core functions which were previously restricted to the US. The service is able to locate nearby restaurants, find football results and cinema listings. Still we don't think you'll be using voice assistant in public and the time it takes to get responses also vary greatly. You can get a response to a query in a second using Wi-Fi, but over 3G, it can be painfully slow (10 seconds+) if the connection is weak.

Social networking users will be pleased to see that Facebook has followed in the footsteps of Twitter and has been integrated into the core of iOS. This allows you to post pictures to Facebook directly from the camera app, get push notifications, sync contacts with your calendar and emails, as well as post directly from the drop down menu. You can even get Siri to post messages for you. The device is so loaded up with notifications, that you may want to switch some of them off.

Passbook is another pre-loaded feature, which aims to collate useful items such as airline tickets and coupons. However, in the UK, it is limited to four partners at present iHotels, United Airlines, Lufthansa and American Airlines. We expect more companies to be added, but don't expect to be using this feature straight out-of-the-box.