Lenovo has squeezed the high-end Xeon processors and NVIDIA Quadro 600 graphics into a small-form-factor workstation. It makes for a powerful, but noisy machine. 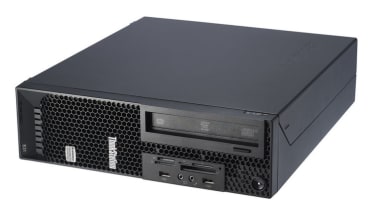 Dozens of companies produce what purport to be business PCs, but only the biggest firms have the clout and ability to design bespoke systems that cater to the corporate world.

Lenovo is one of the big players and its latest system, the ThinkStation E31, aims to maintain the firm's high standards, but does it succeed?

This particular ThinkStation E31 is a small-form-factor model, and much like the last Lenovo workstation which we impressed us the ThinkCentre M90. It's designed in much the same way: press a spring-loaded clip on the rear of the system and the lift lids up to reveal the guts of this diminutive machine.

Lenovo has done well to fit so much practicality into the E31. The processor and motherboard are hidden behind a plastic shroud, the optical drive is held inside a metal cage that handily tilts up to a 90 degree angle, and the hard disk is stored in a purple plastic caddy that can be used without tools. 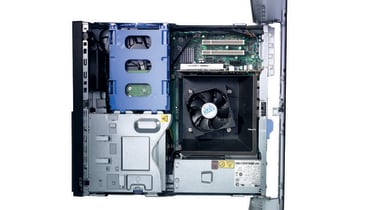 The E31 is easily accessible which makes servicing and upgrading easy

It makes accessing the variety of components relatively simple. The plastic shroud above the motherboard can be removed with four screws and, when it's pulled out of the way, the LGA 1155 processor socket, four memory slots with two vacant and a pair of empty PCI sockets are laid bare. The motherboard has a PCI-Express x1 slot free, too, although its PCI-Express x16 slot is occupied.

The optical drive's cage lifts up with the removal of a single clip, and the hard disk cage is similarly simple to use pull a tab at the end and it moves up on a couple of hinges. Two smaller tabs can be pulled to allow for hard disk removal, and hard disks are held in place on metal pins rather than screws that require tools.