We put the flagship Android and iOS devices head-to-head to see which offers the best mobile experience. 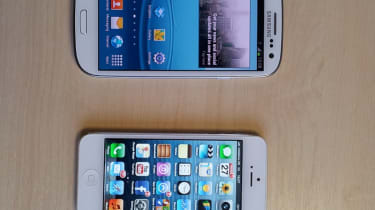 You'll get at least 12 hours of usage out of the Galaxy S3, even when the device is synced to multiple email accounts and you use resource hungry features such as video playback and the internet.

In comparison, the bright Retina Display chews through the 1,440mAh battery on the iPhone 5 and we just about managed to get 10 hours in our intensive battery test. Coupled with the fact the battery pack is not replaceable, the advantage is with Samsung here. 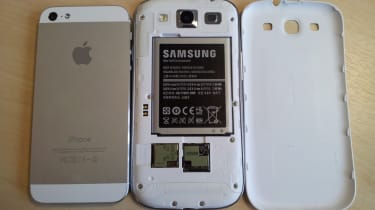 Both operating systems have enterprise-friendly features including the ability to sync corporate emails accounts, and remotely manage and wipe devices.

Samsung pre-loads its devices with the TouchWiz overlay, and whilst this may be cumbersome for some users, it can be easy replaced by downloading an launcher app.

The S3 also has a number of gesture-based features that are not present on the iPhone. Two particularly useful features include Smart Stay, which uses the front facing camera to track your eyes, and automatically dims the display when you look away or put the phone down. Turnover also allows you to mute the ringing tone by turning the device over.

If you've ever used an iPod Touch, iPad or iPhone you'll be familiar with the iOS interface and little has changed in terms of the look.

Apple touts over 200 new features but the key features are the inclusion of Apple Maps, Facebook integration, iCloud Tabs and Do Not Disturb mode. With the exception of the last feature, Android has the equivalent, if not enhanced features.

Apple has 700,000 apps in Apple's ecosystem compared to 675,000 in Google Play. The iOS ecosystem is usually the first port of call for developers when it comes to designing an app. If it's worth having, the chances are it's in the App Store already.

Not only does Apple have a better selection of apps, but iOS trumps Android hands down on security. The Apple App Store is locked down, and this will make it appealing to IT admins. Each app is vetted before being made available to the public, and this help keep the store relatively malware free.