Inside the Enterprise: Firms may have been reluctant to invest in new equipment during the recession, but costlier electricity might force IT to reconsider. 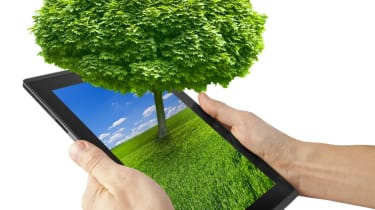 Households could be forgiven for thinking that energy costs have done nothing but rise recently. Over the last decade, electricity have fluctuated, but the overall trend has been up.

According to figures compiled by Parliament, domestic electricity prices are around a third higher than they were in 2000.

Businesses, too, have had to deal with price increases. And IT, in particular, has increased its share of energy bills steadily. Although IT equipment has become significantly more energy efficient over the last few years, there are more devices used in business, and there are more business processes running on more servers, in more datacentres than ever before.

One EU-backed organisation, eInfraNet, calculates that datacentre energy use will double by 2020. Already, the continent's datacentres use as much power as all of Portugal.

But according to Cyrille Brisson, vice president for power quality in Europe, the Middle East and Africa (EMEA) at Eaton, an industrial manufacturer of power equipment, businesses need to take steps to control their IT energy usage now, before prices rise even further.

The problem, according to Brisson, is that non-IT businesses, from small firms to enterprises, have simply not kept up with either the pressures on demand, or improvements made elsewhere in controlling IT energy use. The largest online businesses and hosting companies, he says, are now significantly more efficient than they were a decade ago. But other businesses, especially those that still rely on small and distributed data rooms, are missing the opportunity to control both costs and carbon footprints.

Energy costs, for their part, account for between a third and half the running costs of data centres, so even relatively small steps to control consumption should pay dividends relatively swiftly. But although investing in more advanced power and cooling equipment is one option, it is not the only one. Nor is it likely to bring the quickest results, Brisson suggests.

That will come from consolidating data rooms and smaller datacentres into larger units, that allow greater economies of scale. Larger units lend themselves to more sophisticated management tools, and more effective design. And the equipment within the racks themselves can be run more effectively too.

With properly managed datacentres, issues such as lower levels of resilience a concern when consolidating datacentre sites can be addressed. And a smaller number of larger datacentres can, according to the experts, be more resilient because they can have better power and internet connectivity as well as management and even physical infrastructure such as the buildings and security systems.

More sophisticated power systems, such as modular UPS equipment is of course going to help, but to be effective it has to go hand in hand with other efficiency measures.

Prime among these is virtualisation. By moving away from reliance on physical servers in favour of virtual machines, businesses can bring dramatic increases in their IT utilisation.

The average efficiency of a datacentre in 2011 was 1:83, based on the Power Usage Effectiveness measure, meaning that it takes almost as much energy is wasted running the datacentre, as is actually used to run the IT. Among smaller companies, the PUE can be as high as two. But best in class operators, such as Facebook, have a PUE of 1.08. This shows that with the right technology, and leadership, it can be done.