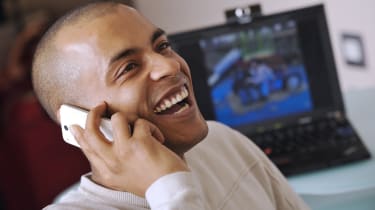 Skype users are being targeted by a worm that downloads malware to their PCs, and may even demand money to regain use of their machines.

The malware Trojan allows hackers to take control of infected computers and use them as part of botnets, but security researchers have warned that the Trojan can also download "ransomware" to infected PCs.

Affected users risk being locked out of their computers, and forced to hand over money in order to regain access to their data.

The Skype worm spreads by convincing users to click on messages with a link to the malware. The link usually refers to a user's new profile picture, with text such as "lol is this your new profile pic?".

According to security researchers at security vendor Sophos, the link then downloads a zip file, which contains a Trojan. The Trojan allows hackers to control the infected PC remotely over HTTP. The malware, according to Sophos' Graham Cluley, is a version of the Dorkbot worm.

The worm has been spreading for some time via other social networks including Twitter and Facebook, and could also spread via USB sticks, Cluley warned. But Skype users might be less wary of clicking on links than users of services such as Facebook, he suggested.

"We are aware of this malicious activity and are working quickly to mitigate its impact," the company said in a statement. "We strongly recommend upgrading to the newest Skype version and applying updated security features on your computer. Additionally, following links - even when from your contacts - that look strange or are unexpected is not advisable." Skype has also issued more detailed security advice to its users.

So far, only Windows PC users appear to have been targeted by the attack.