We take a look at Sony's forthcoming 11in Windows 8 hybrid device, which packs unique connectivity features and a slide-out keyboard. 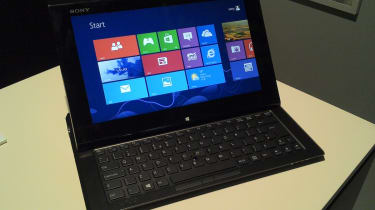 Sony will launch a Windows 8 hybrid device on 26 October and it's got some unique features that could help to differentiate it from the host of other devices on course to flood the market.

The Vaio Duo 11 is based on a slider design, and reminds us of the Asus Transformer Slider. It looks like an Ultrabook when fully open, but the keyboard can be hidden away so the device can be used as a tablet albeit a slightly chunky one. It also weighs in at 1.3kg, so it's not going to be as light as a standalone tablet and should be similar in weight to an Ultrabook.

The first feature which stands out is the bright 11.6in HD touchscreen (1,920 x 1,080). It's reasonably big and bright, but responsive and has 10-touchpoints. We found it particularly easy to navigate around Windows 8 using just the screen - you can simply tap on icons to open apps, swipe between screens and even input content using a stylus (which is included). 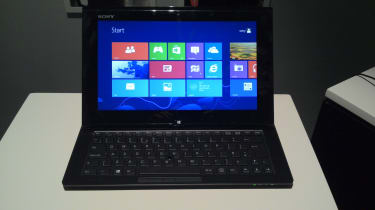 Switching the device between Ultrabook and tablet mode is easy the screen requires a firm push to slide out and then clicks into place with a satisfying "thunk". The device feels sturdy, but the slider design means hinges are exposed, so you're going to have to treat the tablet carefully.

On initial inspection, the most impressive feature we noticed was the selection of ports. Sony has all your connection needs covered here with 2 x USB 3.0 ports, HDMI and VGA connections, as well as an SD card support to boost the internal storage. 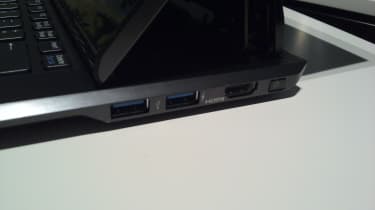 The keyboard is shaping up to be the weak link, though. We found the letters to be far too small compared to a traditional keyboard. The small nub isn't an adequate substitute for a touchpad and we'd suggest plugging in an external mouse.

Important keys, such as Shift, are particularly tiny and the only positive feature we noticed was that the keyboard was backlit. If you're used to typing on a full-sized keyboard, it looks like you're going to have to significantly change your typing technique to suit this device.

Considering that you can't just swap the keyboard out for another one, we'd recommend trying it, instead of just buying it from the internet. 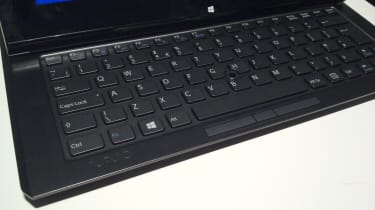 Oddly, although Sony provides a pressure sensitive stylus with the device, there is no way to dock it if you buy the standard configuration. It'll likely get lost or misplaced, unless you opt for the extended battery, which has a little holder attached.

In terms of battery life, Sony told us the standard pack will provide up to 5 hours of uptime which isn't great. The extended battery is capable of doubling this to a more reasonable 10 hours of usage.

With a starting price of 1000 the price is going to be the biggest stumbling block to adoption by business users, especially in this climate. With the Core i7 configuration set to cost 1,500, it remains to be seen whether Sony has priced itself out of the market.

The Windows 8 market is going to be flooded from 26 October, and Sony is offering a decent proposition in the form of the Vaio Duo 11. It's got the power, storage and portability. But we're unconvinced users will flock to this device as it has a £1000 price tag.