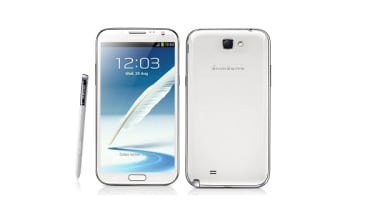 The latest handset Android Jelly Bean 4.1 adds a number of features. Notifications let you know whenever you have a new Twitter or Facebook interaction, email, missed call, SMS, download, update there's pretty much a notification for everything. You can get rid of the notifications with a single swipe, but we found all too often the pull-down notifications screen full to the brim. 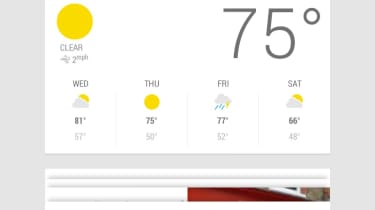 Jelly Bean provides all the latest features from Android, including Google Now

Google Now is Android's answer to Siri and more. It'll identify the location of your home and workplace and then work out a route to work, for example. If you have a meeting in your diary, Google Now will work out what time you need to leave home and come up with a route to make it on time. It will take into account delays you might encounter due to traffic jams or public transport problems.

Samsung's stock keyboard makes use of all the space available as you'd expect. Although you'll never miss a letter when typing, you may find it a little hard to reach all the letters, even if you have large hands. Initially, we kept pressing the B key instead of the space, but this is something you'll soon get used to.

The Samsung Galaxy Note is the first step to perfecting the smartphone-tablet hybrid. Although at the moment it feels as though Samsung has tried a little too hard to just enlarge the Samsung Galaxy S3 into a new format, we hope the next UI update will embrace the Note 2 as a phablet rather than an oversized smartphone.

The Samsung Galaxy Note 2 is a huge improvement on the Samsung Galaxy Note and the best large format smartphone we’ve seen. With all the S Pen functions, Android Jelly Bean, nippy processor and of course, that largebattery, it’s the first phablet we’ve seen that works as such. With a couple more refinements, such as better use of that large screen, Samsung could have the format perfected, just like Apple has the tablet perfected in the form of the iPad.