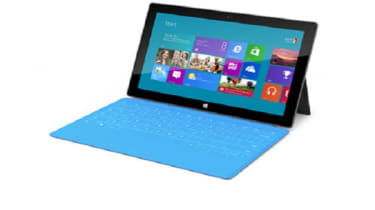 Microsoft's decision to launch the RT version of its Surface tablet several months before the full Windows 8 Pro version is set to drop could end up confusing customers, industry watchers fear.

The ARM-based Surface RT tablet will go on general release from 26 October as part of the software giant's wider Windows 8 launch.

Surface Pro combines the sexiness of the Surface with the full business operating system.

Unlike the plethora of other Windows 8 tablets that are set to go on general release later this week, the Surface RT will only run pre-installed Microsoft desktop apps.

Instead, users of the device so called because it runs the Windows RT operating system will only be able to use these pre-installed applications, as well as Metro-style apps.

A more businessfocused version of the device, Surface Pro, is tipped to go on sale in early 2013, and is expected to let users run both desktop and Metro-style apps.

Speaking to IT Pro, Richard Gibbons, software manager at Microsoft reseller Bechtle Direct, said, since news of the Surface first emerged in June, business users have shown a lot of interest in the device.

"We've had dozens and dozens of customer requests for Windows 8 tablet loan units, made by other vendors, and many are asking, if you can get us a Surface [on loan], please do'," said Gibbons.

"When the Surface Pro [launches], I think that will be as exciting for everyone as the initial launch of Windows 8...because it combines the sexiness of the Surface with the full business operating system," he added.

However, industry watchers warn that, unless Microsoft does a better job of communicating the differences between the RT and Pro versions of the Surface, some buyers could be left disappointed.

A Microsoft supply chain source, speaking to IT Pro under condition of anonymity, said the company is taking "massive gamble" with the release of Surface RT.

"No-one's telling the consumer that, if they buy the Surface RT, it will only run Microsoft [Metro-style] applications and there aren't that many of them available," said our source.

"I think [Microsoft] is making a mistake by launching RT first, because users will buy it, realise it doesn't do anything and that will put other people off buying the full blown [Pro] version."

Andrew Buss, service director at IT analyst house Freeform Dynamics, said there is "a risk" early Surface adopters might be disappointed with functionality of the device.

"Unless it is explicitly explained to customers that it won't run desktop apps, [which is something] I think does need to be very clearly explained in the marketing, there is a risk," Buss told IT Pro.

"It is a brave thing they are doing. It's not going to be perfect, but in order to progress, Microsoft need to take some of these risks," he said.

To ensure brand loyalty, Microsoft will need to have a good customer care policy in place that will allow Surface RT buyers to exchange the tablet for the full x86 version, said Buss.

"If they are unhappy, Microsoft should allow users to trade up without being out of pocket or suffering a bad customer experience," he added.

IT Pro was awaiting a response from Microsoft to this story at the time of publication.