Consumer electronics giant unveils a bumper set of new products, including a 7.9in iPad. 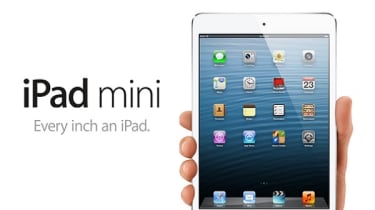 Apple has unveiled two new additions to the iPad family, including a 7.9in tablet and an updated version of its flagship 9.7in tablet.

The consumer electronics giant ended months of speculation by finally taking the wraps off a 7.9in tablet called the iPad Mini.

The new device is powered by an Apple A5 chip, is 7.2mm thick, weighs in at 0.68lbs and can achieve 10 hours of battery life.

Others have tried to make tablets smaller than the iPad and failed miserably.

As predicted by several industry watchers, the tablet does not sport Retina Display, but does boast a screen resolution (1024x768) that is comparable to the iPad 2.

Speaking at the product's grand unveiling in San Jose earlier today, Phil Schiller, Apple's senior vice president of worldwide marketing, wasted no time in trying to distance the iPad Mini from the raft of other 7in tablets that have recently come on the market, namely the Google Nexus 7.

During the event, Schiller pitted the two products against each other, in an attempt to highlight the Google device's shortcomings, taking shots at its weight, thickness and web page viewing experience.

"Others have tried to make tablets smaller than the iPad and failed miserably...They're not great experiences," he said.

"We have over 700,000 apps [for all devices]...[users] love the ones written for the iPad...they have phone applications [that have been] stretched up."

The iPad mini packs a 7.9in display, A5 dual-core processor, FaceTime HD and LTE connectivity. Despite the 269 price being nearly double that of the Nexus 7 and Kindle Fire HD, the Apple branding and ecosystem is likely to make it a hit this Christmas.

The vendor also used the event to take the wraps off a new fourth generation iPad, which is being ushered in just six months after the previous version.

Schiller's fighting talk continued during his walkthrough of the device, with him declaring: "[This puts us] so far ahead of the competitionI can't even see them in the rear view mirror."

End users that plump for the Wi-Fi and cellular versions of the device can expect to pay 100 more for the 16GB, 32GB and 64GB models.

During the opening preamble to the devices' unveiling, Apple CEO Tim Cook revealed that over 100 million iPads have been sold since the first generation of the device went on sale in early 2010.

"This is the fastest upgrade rate in history that we are aware off," he added.

The company also used the event to showcase a couple of new addition to its laptop and desktop computer range, including a new 13in MacBook Pro with Retina Display and a new iMac.

The former is powered by a dual core i5 or i7 Intel Ivy Bridge processor and boasts a seven hour battery life, claims Apple.

"It joins the 15in [MacBook Pro] as the only two notebooks in the industry with retina display," added Schiller.

The iMac is 5mm thick around the edge and is encased in an all-in-one aluminium enclosure. It is reportedly 45 per cent thinner than the previous generation, as well as being 8lbs lighter, and is available as a 27in or 21.5in device.

Making its debut on the device is Apple Fusion Drive, which combines 128GB of Flash storage with a hard disk drive.

"All of the pre-installed Mac software sits on Flash [and] automatically, as you're using it, it'll work out what you use most and move it to Flash," said Schiller.

To mark the close of the event, Apple's Cook paid homage to the effort the firm's development team has put in to allow the vendor to roll out so many products, including the iPad 3, iPhone 5 and the MacBook Pros, already this year.

"This has been a truly prolific year of innovation for Apple. We hope you love these products as much as we liked creating them," Cook concluded.