All the key details of the 7.9in iOS tablet. 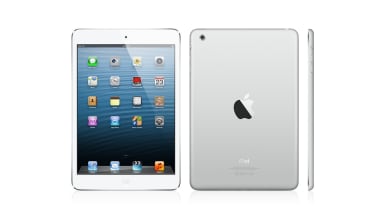 So the worst kept Apple secret, since at least the iPhone 5, has finally been unveiled in the form of the iPad mini.

Seen as a cross between an iPhone 4S and iPad 2, the iPad mini is being launched to coincide with the release of Windows 8, and is likely to attract users who may have found existing iPad devices too expensive.

Although cheaper than its larger siblings, the iPad mini isn't as cheap as its Android rivals such as the Google Nexus 7 and Amazon Kindle Fire HD. The iOS 6 device comes with a starting price of 269, making it 110 more expensive. So what exactly do you get for your money?

The majority of specifications had been leaked prior to launch, including the name. However, Apple managed to keep everyone guessing about the key feature - the display.

Apple chose a 7.9in screen size, but refrained from using a Retina Display to keep the costs down for the first generation. Instead the iPad Mini packs a 1,024 x 768 resolution and has a pixel density of 168ppi.

Apple has confirmed that all 275,000 iPad specific apps will work on the mini as the aspect ratio has been unchanged.

Despite having a screen size which is 0.9ins larger than the Nexus 7 and Amazon Kindle Fire HD, the iPad Mini is considerably lighter. The iOS device weighs in at 308g, compared to 340g for the Nexus and a beefy 395g for the Fire HD.

In terms of dimensions, the iPad mini has a thickness of 7.2mm, which Apple is touting as comparable to a pencil.

The iPad mini is powered by an A5 dual-core 1GHz processor, putting it up there with its rivals. RAM is unconfirmed, but is expected to be between 512MB and 1GB. With internals similar if not identical to the iPad 2, and there should be no issues in terms of performance.

Apple offers the usual internal storage options of 16GB, 32GB and 64GB. The firm backs this up with iCloud, which means you get 5GB of free cloud storage and can purchase more as and when required.

The iPad mini has dual-band Wi-Fi capabilities, Bluetooth 4.0 and assisted GPS. There is also the option to get an LTE (4G) model if you need to use the internet on the move. This will require a nano-SIM, and at present you'll be restricted to using the EE network for 4G.