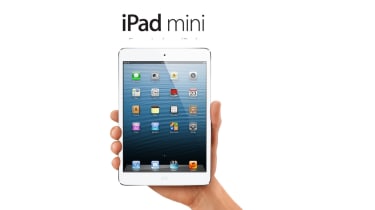 Industry watchers claim Apple should have no problem making its mark in the 7in tablet market, despite launching the iPad Mini several months after similar devices from Google and Amazon.

The consumer electronics giant finally unveiled the iPad Mini,following months of speculation, at an event in San Jose yesterday evening.

As reported by IT Pro yesterday evening, the new 7.9in device is 4G enabled and is powered by the Apple A5 chip, which is the same one the iPhone 4S runs on. It is also 7.2mm thick and weighs in at 308g.

It is definitely a market they should be playing in already.

During the product's launch event, Apple's senior vice president of worldwide marketing, Phil Schiller, went to great lengths to point out how much better the device was to view web pages on than the Google Nexus 7, which made its debut in July.

"Others have tried to make tablets smaller than the iPad and failed miserably...They're not great experiences," said Schiller.

Speaking to IT Pro ahead of last night's launch, Rob Bamforth, service director at Quocirca, said 7in devices are better suited to consuming content than creating it because it can be difficult to input data on them.

Because of this, he correctly predicted Apple would use the event to focus on why its new form factor is better for consuming content than the other 7in devices on the market.

"They would not admit to following other [vendors] with the size of the device, which means the focus will be on why their form factor is a better one for certain usage scenarios," explained Bamforth.

He also suggested that Apple's relatively late entry into 7in tablet space could leave them vulnerable to attack from rivals who may accuse the firm, which prides itself on being a tech innovator, of following the crowd.

After all, late Apple CEO Steve Jobs, previously rubbished the idea of releasing a 7in iPad because of concerns over the tablet app user experience.

"The challenge for Apple is that they're at the top of the pile [in the tablet market] and that means they are the one everyone wants to have a pop at," said Bamforth.

"That makes them far more vulnerable and also means customers have an incredibly overinflated expectation about everything they do."

Meanwhile, an Apple supply chain source, who spoke to IT Pro on condition of anonymity, said based on the feedback received from the firm's retail operations a smaller iPad should prove popular with customers.

"There's definitely demand for [a smaller tablet], which has been proven by the sales success of the other products on the market [Google Nexus 7 and Amazon Kindle Fire HD]," said our source.

"A lot of older customers want a smaller device to read and consume content on, whereas younger customers favour larger devices because it is easier to do more stuff with."

However, the starting price of 269 for the iPad Mini could put off some users, our source added.

"It is definitely a market they should be playing in [already] and it will sell well, but a [starting] 199-to-249 price point would be ideal."

According to figures released by IT market watcher Context, sales of 7in tablets have skyrocketed over the past six months, with 10,000 units sold during the second quarter rising to 220,000 in the three months to September.

Salman Chaudhry, mobile computing analyst at Context, said the spike in sales was down to the success of the Nexus 7 and Samsung Galaxy P3110, as well as RIM's decision to cut the price of its 7in Playbook tablet.

We expect the iPad Mini to take revenue away from Amazon.

"Across Western Europe and prior to Google's and Samsung's launches this summer, the market share of 7in tablets was around 7 per cent in June. This skyrocketed to 36 per cent in September," said Chaudhry.

The launch of the iPad Mini should be a cause of concern for the other runners and riders in the tablet market, particularly Amazon.

"We expect it to take revenue away from Amazon, as [it will be] much more of a content consumption device than its siblings," he said.

"We expect to see Apple take sales away from the Kindle family of devices and the Kindle app itself, as Apple will be marketing the tablet as an iBook, iTunes consumption device."