The Windows RT tablet is shaping up to be a compelling alternative to the iPad. 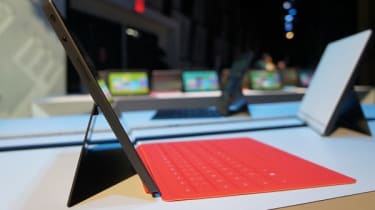 After getting our hands on the device in New York, the initial verdict on the Surface RT is in - it is a staggeringly good device.

I'll kick off by focusing on one of the underrated features of Surface RT - wireless reception. This boring topic is something that's difficult to get people excited about, until they need to get internet access in an area of poor coverage. Then, suddenly, it's all-important.

Microsoft has put a good deal of effort into wireless, including two MIMO aerials where most tablet makers opt for one. It was certainly a match for my Asus Ultrabook in the theatre, but to be sure I'd have to take it home with me (something the bulky security guard looking over my shoulder seemed less positive about than I did) and use it in the wireless-free areas that litter my lounge.

Then there's the magnetic mechanism that clamps the Touch Cover to the tablet. Unlike the iPad, you can hold the Surface by the cover and let it drop without fear the tablet will break off and smash to the ground. We also saw Panos Panay, the general manager of the Surface team at Microsoft, bravely drop it on stage during his demo and the machine carried on working (see the video below).

At this point I'm unapologetically going to get more geeky and talk about how that mechanism works. The answer came quite unexpectedly when I started chatting to Ralf Groene, creative director of Surface, later on at the event.

The key point to understand is that magnets work extremely well when they're directly aligned, but if they move out of position then the connection becomes weak. So, if you swing the cover around and the angle shifts, the connection will break and your tablet will fly off into the distance.

This was a problem that afflicted an early version of the Surface, until one of Groene's team came up with the solution: two protrusions on the cover that would ensure it stayed perfectly aligned unless enough lateral force was applied. How much force? Roughly what you'd expect from a five-year-old.