Android browser head-to-head: Chrome vs Dolphin vs Firefox vs Maxthon vs Opera Mobile vs Skyfire

We put the most popular Android browsers up against the default offering to see which offers the best performance and HTML5 compatibility. 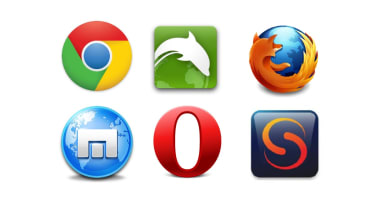 Without compatibility, raw performance is useless. In this test, the results are dramatically different: Opera, the second-slowest browser during the Peacekeeper test, tops the chart with an impressive 406 points out of a possible 500. Compatibility with the HTML specifications has always been Opera's strong point, and its Android browser is no exception to that rule. 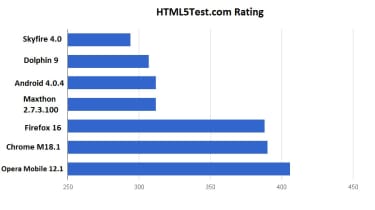 Just edged out of the top spot is Google's Chrome, which scores 390 points. This is right up there, and significantly better than the stock Android browser's 312 - providing a clear idea of where Google is focusing its efforts with browser development. With Firefox scoring 388, however, Google will have its work cut out not to be surpassed in future releases.

The remainder of the browsers on test proved somewhat middling in their support for the HTML5 standard. Maxthon and the stock Android browser both scored an identical 312 points, while Dolphin slipped behind with 307. Bottom of the table was, again, Skyfire, with its unique approach to rendering content docking a few points with a total of 294 out of 500.

If there's one thing to take away from this test, it's this: the stock Android browser is capable, able to hold its head up with the best of them in the performance stakes. While its compatibility with certain less common aspects of the HTML5 specification is somewhat lacking, it's easily able to cope with the majority of websites without complaint.

However, it's a good idea to have a second browser installed. Opera certainly wins in the HTML5 compatibility tests, but its relatively poor performance means that Chrome is the better all-round choice if you're running Android 4.0 or higher. For those lucky enough to own a handset running Android 4.1 or newer out-of-the-box, there's no need to change at all: on everything shipped with 'Jelly Bean' Chrome is the default browser.

If you want to experiment with advanced features, such as voice recognition or customisable gesture support, or you're running an older version of Android that doesn't support Chrome, you can try Maxthon or Dolphin. We're not convinced they offer enough of an improvement over the stock browser to make the switch fulltime though.

Finally, Firefox is one to keep an eye on - but if you're using one of the few Android devices on the market with Intel's Atom chip at its heart, you'll be left out in the cold as only ARM devices are supported at present.

We'd recommend sticking with the stock Android browser or using the Chrome browser if your device supports it, as this is the best all-rounder. Opera is also a good choice for users who have a small data allowance as it eats up less data than competitors thanks to compression technology. Firefox was surprisingly sluggish and we wouldn't recommend unless you have a high-end smartphone.